Solar panels have become normalized among landscapes, spotted everywhere from the open spaces of deserts to rooflines of dense residential areas. Installed on rooftops, covered carports, parking lots, and even closed landfills, solar accounted for 3% of America’s electricity in 2020, according to the U.S. Energy Information Administration (EIA). That number may seem small now—but the figure is projected to climb to 20% by 2050.

Stacker analyzed which states have the largest solar economies by analyzing data collected by the Solar Energy Industries Association (SEIA). To adjust for population, states are ranked by the number of solar jobs per 1,000 in the non-farm sector, according to data from the Bureau of Labor Statistics.

The Bureau of Land Management requested in December 2021 that land be nominated for solar energy projects in Colorado, New Mexico, and Nevada—all states on the forthcoming list. This comes amid President Biden’s push for clean energy, including plans to optimize existing clean energy projects and construct new transmission lines to deploy that energy.

Nationwide, installations are encouraged by incentives such as a federal tax credit ranging from 22% to 30% of the system’s cost. State incentives exist as well, such as tax credits and net metering programs that compensate owners for the excess electricity they produce.

Keep reading to discover which states have the biggest solar economies.

You may also like: Major cities most at risk of rising sea levels 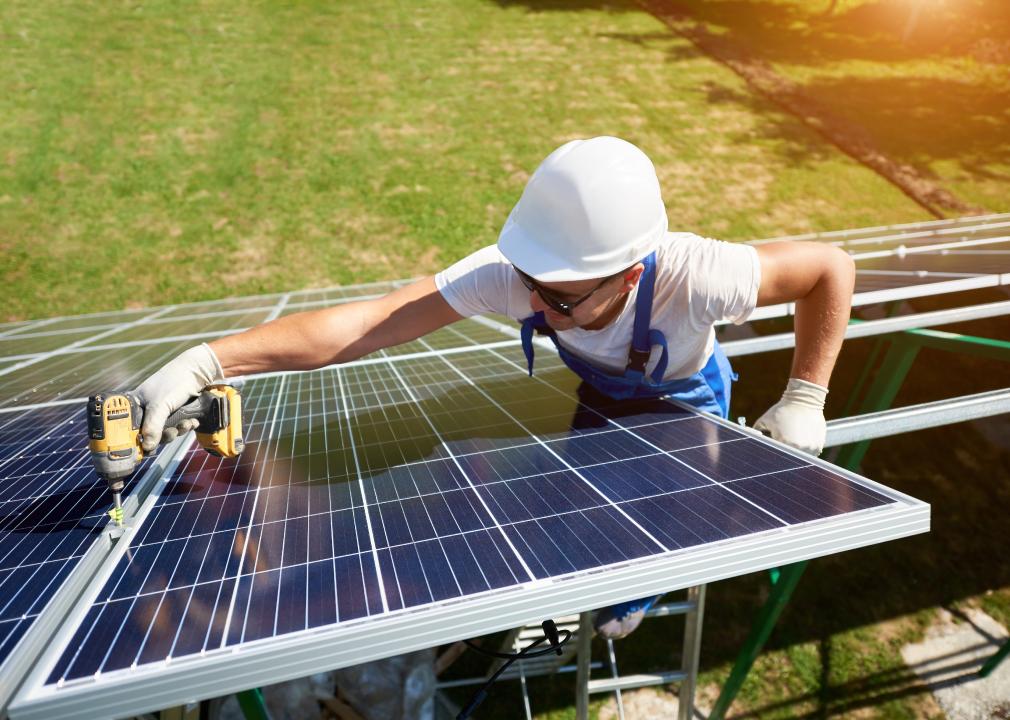 Solar power production quadrupled between 2018 and 2020 in Rhode Island, according to the EIA. In 2020, then-Gov. Gina Raimondo signed an executive order setting a goal for 100% renewable energy in Rhode Island by 2030. That year, solar energy accounted for 6% of the state’s power. Rhode Island even launched a Community Solar Marketplace in 2019 for residents to learn more about and participate in community solar projects.

The state could also potentially outpace its energy consumption with solar arrays on landfills, gravel pits, parking lots and more, according to a report from Synapse Energy Economics Inc. that was commissioned by the state’s Office of Energy Resources. 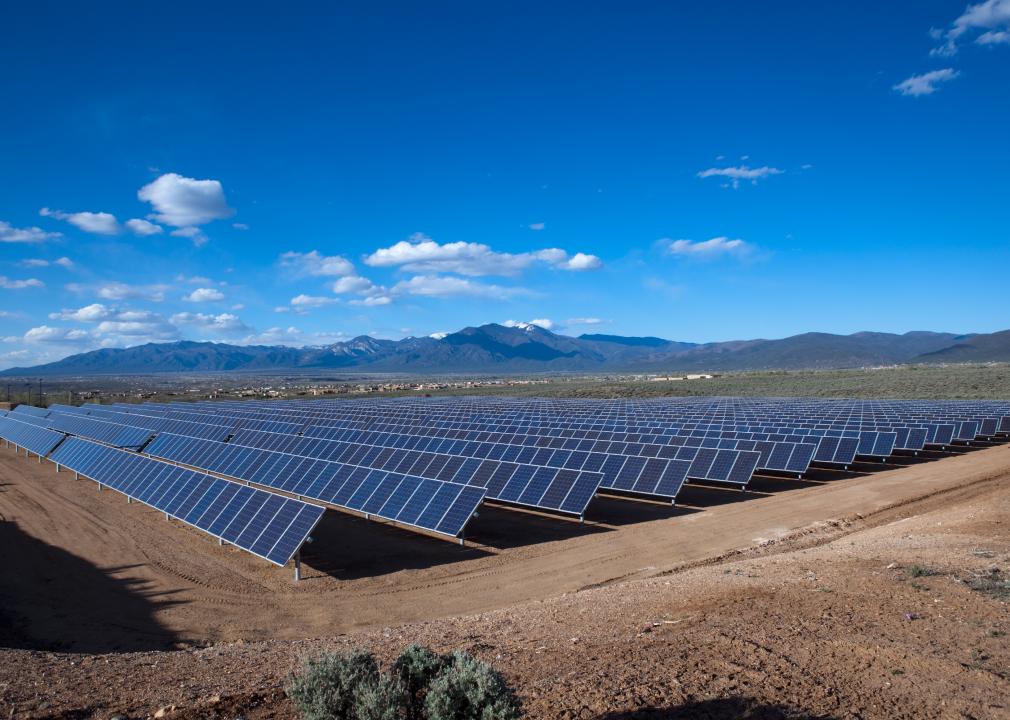 New Mexico has become a hub for solar energy, with 2022’s American Solar Energy Society (ASES) National Solar Conference being held in Albuquerque this June. The state in April 2021 became the first to pass legislation on community solar projects where multiple people buy into a facility and receive credit on their electricity bills in return. Community initiatives like these aim to make renewable energy more accessible by eliminating barriers like the initial costs of setting up solar panels.

One community solar project in the works is at Santa Fe’s Casa Milagro, a housing facility for those facing homelessness and mental illness. New Energy Economy, a nonprofit advocating for renewable energy, had raised $54,000 for the project at Casa Milagro as of October 2021, with another $18,000 to go, the Santa Fe New Mexican reported. The organization has also raised enough money for about a dozen other community solar projects in the state. 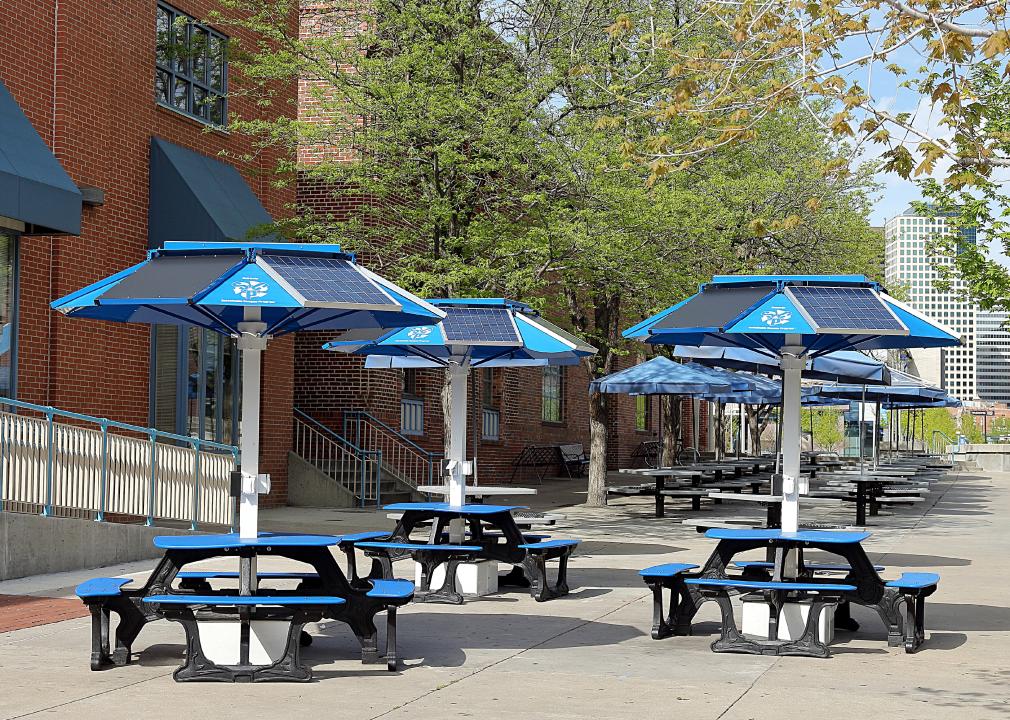 Like Rhode Island, Colorado aims to be 100% renewable—but with a slightly longer timeline. The governor’s January 2021 “Greenhouse Gas Pollution Reduction Roadmap” aimed to plan out how the state could reduce 2005 emissions levels by 90% by 2050. An intermediary goal is to reduce emissions levels by 80% by 2030. In areas affected by a declining coal industry, like North Fork Valley, some hope that bolstering solar energy will create more jobs, according to reporting from KVNF. 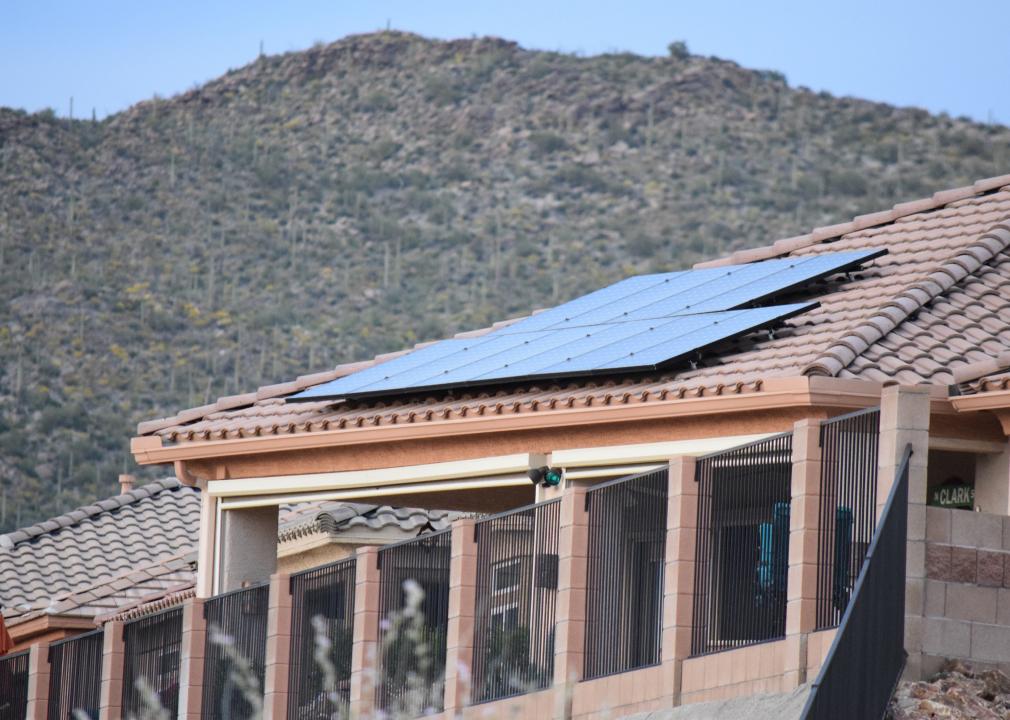 Solar energy in Arizona has created more than 7,300 jobs and enough electricity to power over 950,000 houses as of the third quarter of 2021, according to the SEIA. Some large retailers in the state like Albertsons Companies, which owns Albertsons, Safeway and other supermarkets, have opted to use solar to power stores. As of 2019, solar panels on nine Albertsons Arizona stores generated over four million kilowatt-hours of energy each year, according to the water and energy company Salt River Project. 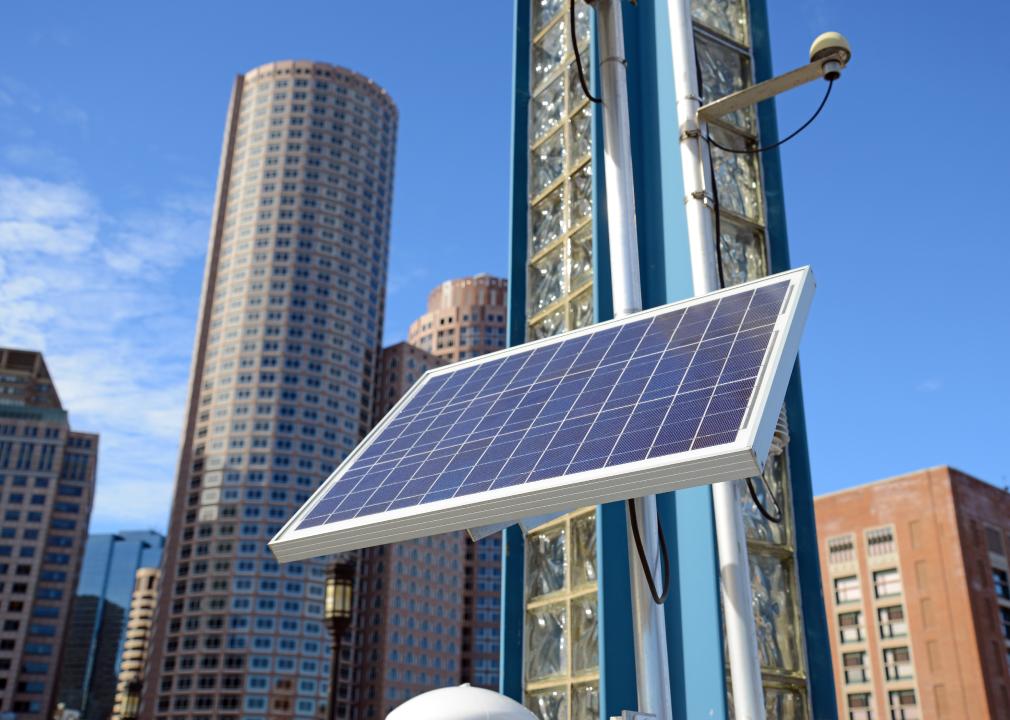 Massachusetts in 2018 established the Solar Massachusetts Renewable Target (SMART) program to incentivize solar development in the state. Two years later, the state’s Department of Energy Resources expanded the program from 1,600 to 3,200 megawatts in response to a drop in solar installations. But the Department of Public Utilities took more than a year and a half to actually implement those changes, which went into effect on Jan. 14, 2022. The new order will further the state’s goal of bringing greenhouse gas emissions to 45% of its 1990 levels by 2030.

You may also like: Most imported endangered animals to America 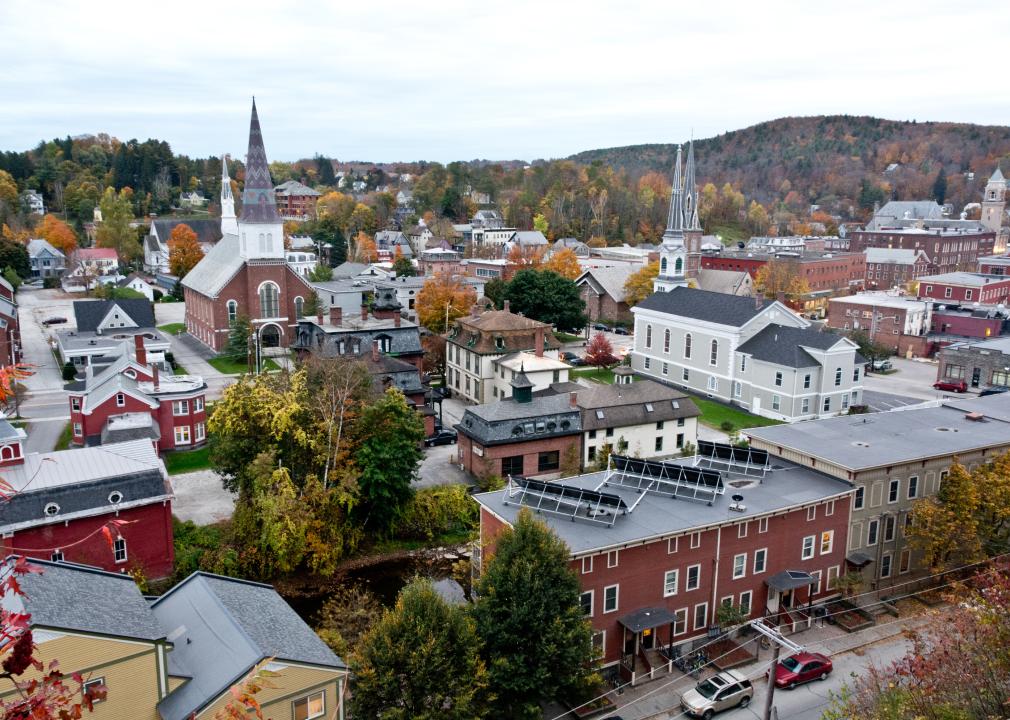 Vermont is a small state and accordingly doesn’t rank highly nationwide when it comes to total megawatts—but it produces more than 14% of its power using solar, according to the SEIA and EIA. The rapid growth of solar in Vermont was driven in part by state net metering policies that give solar users credit back for the electricity they generate, as well as other federal incentives. But in late 2020, the state’s public utilities commission lowered the net metering rates and prompted concerns from some solar industry officials about solar’s continued expansion in the state. 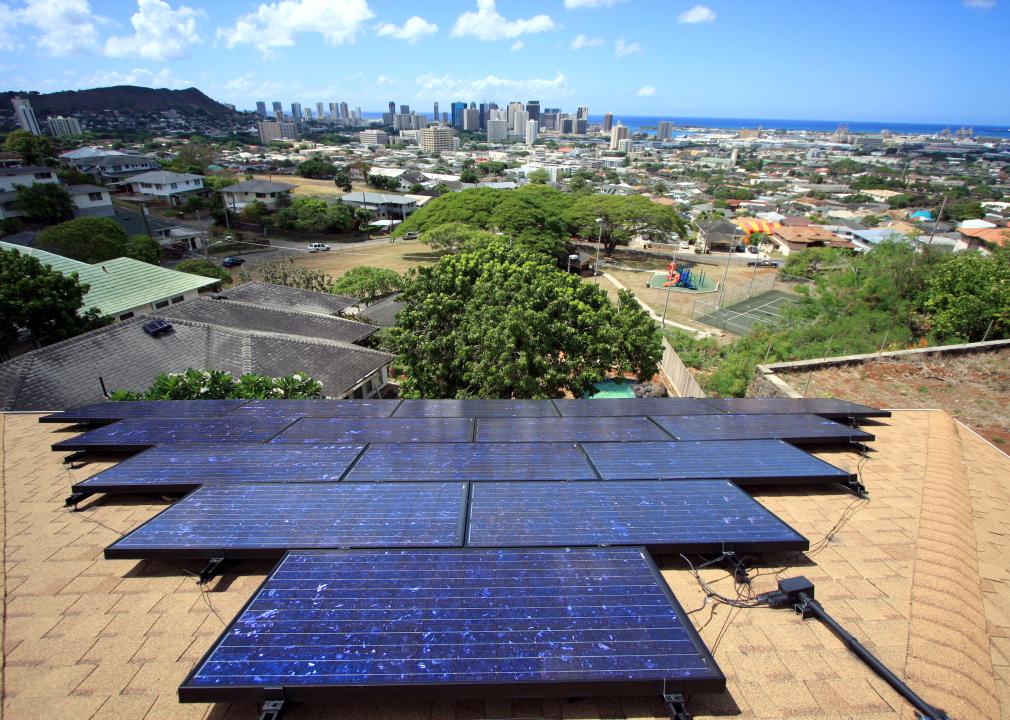 Hawaii has long bolstered its solar economy with incentives like a 35% renewable energy tax credit. The incentive, first enacted in 1976, applies to both individuals and corporations: The 35% credit maxes out at $2,250 for single-family properties and $250,000 for commercial ones.

Real estate company Real Estate and Living Hawaii estimated that a six-kilowatt solar system could reduce electric bills by as much as $300 a month. In 2020, 35% of the energy provided by Hawaiian Electric—which powers 95% of the state’s residents—was renewable. Nearly half of that renewable energy came from solar. The state stopped net metering in 2015, which dropped the number of active solar companies and residential permits for solar installation. Still, solar continues to grow in Hawaii. Installations of rooftop solar systems increased by 55% from 2019 to 2020. 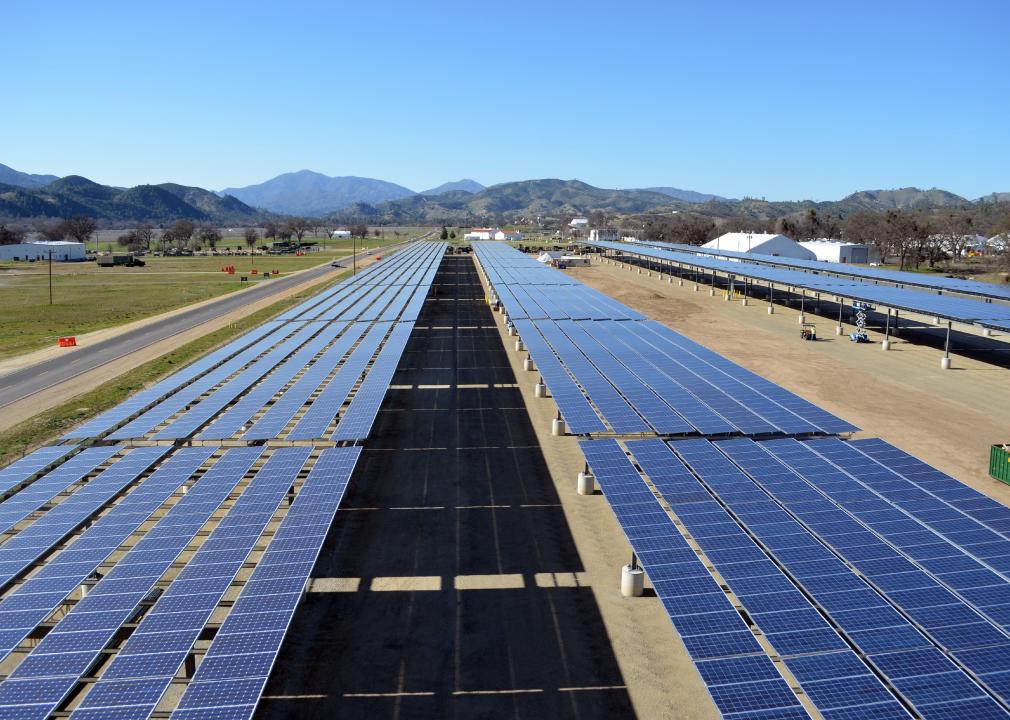 Although outpaced by two other states, California is the longtime nationwide leader in solar power. In 2015, the state was the first to have 10 gigawatts of solar installed. The state continues to be at the forefront of solar, having mandated solar installations on many of its newly constructed buildings. In December 2021, the Bureau of Land Management approved two solar projects in Riverside County, which would generate up to 465 watts—enough to power roughly 132,000 homes.

The future of solar in California may be affected if the state’s Public Utilities Commission passes legislation to remove net metering as soon as Jan. 27, 2022, the Los Angeles Times reported. 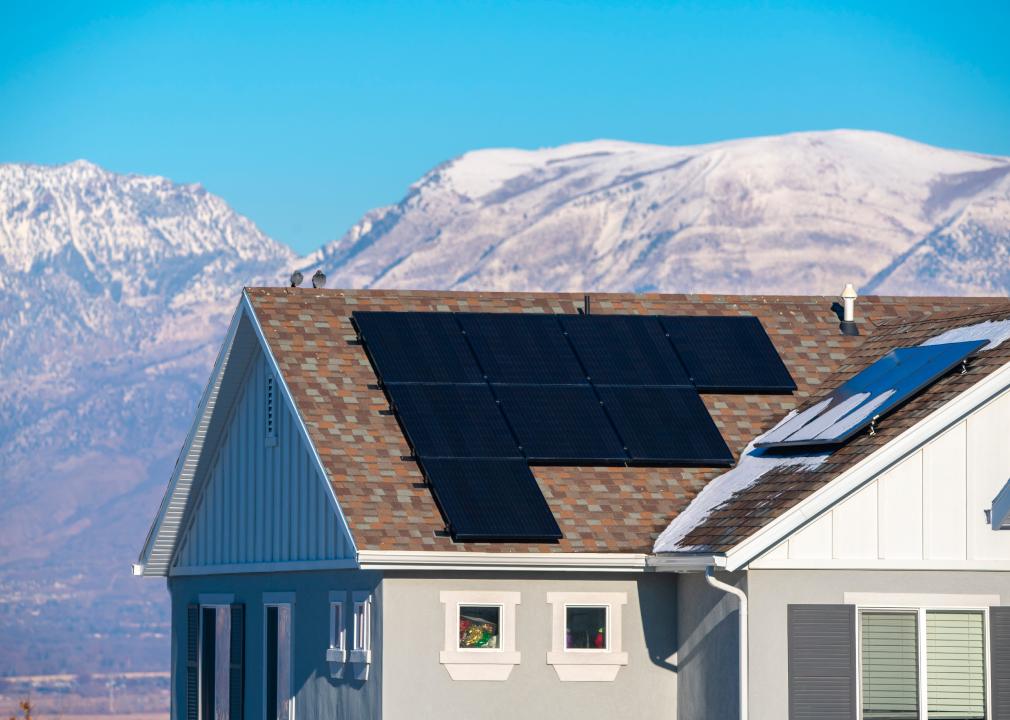 Utah’s solar capacity rapidly increased midway through the last decade, with rooftop solar going from one megawatt in 2009 to 130 in 2016. The state’s solar growth is driven by several initiatives.

A renewable portfolio goal requires that investor-owned and municipal utilities, as well as electric co-ops, use renewables to account for 20% of their adjusted electricity sales by 2025—but only if it is cost-effective for the company to do so. The state also has net metering and tax credits for commercial solar systems. The residential tax credit in Utah expired as of Dec. 31, 2021. Even with the rise of solar, Utah still has a booming oil and gas industry. The Biden administration’s policies—like last year’s temporary ban on drilling and the bipartisan infrastructure deal’s clean-energy plan—have raised concerns from those in the state’s industry about job loss. 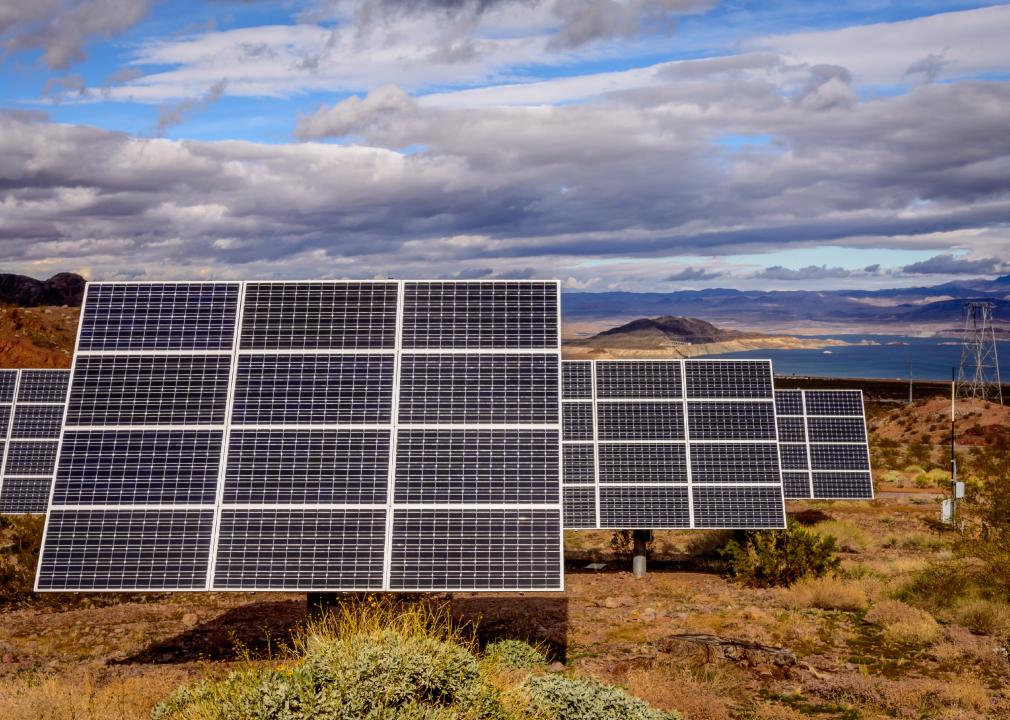 In 2010, Nevada’s Silver State North Solar Project became the first-ever approved solar project on public lands. The state, with its vast and sunny deserts, has been a hub for solar energy—though not without hiccups.

Nevada’s Public Utilities Commission dramatically changed its net metering policies in 2015, leading to higher fees and less credit back for generated solar power. There was immediate backlash, with three solar companies saying they would leave the state—a major blow to the state’s solar economy. After lots of back and forth, today’s net-metering policies allow solar users to receive 75% of the retail rate for the extra electricity their solar system generates.

Solar will almost certainly continue to expand in Nevada, as the Bureau of Land Management considers three proposed solar projects that would power 520,000 homes. But this expansion has prompted pushback from tribal communities, conservationists, and others who support clean energy but worry that new construction threatens Nevada’s tribal lands and deserts.