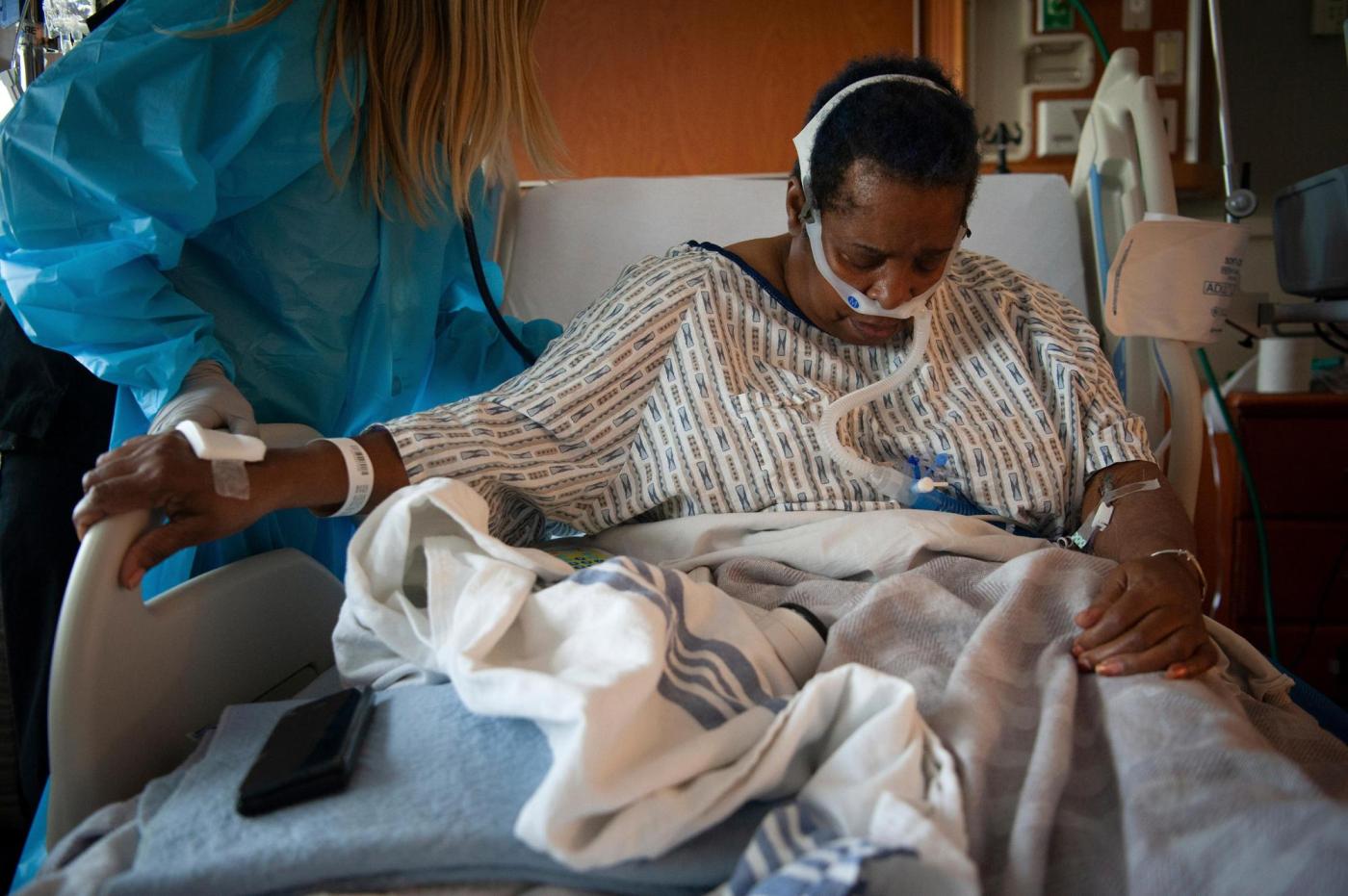 PASCAGOULA, Miss. — Bobbie Anne Sison was heading to the hospital just before dawn when she got a panicked call from one of her best nurses saying she couldn’t come to work because her car had overheated on Route 63. Sison, a nurse manager at Pascagoula Hospital, slammed on the brakes, made a U-turn and raced to fetch her.

“We have staff members dropping like flies from COVID so there was no way I was going to leave her on the side of the road,” Sison said a few hours later as she walked the corridors of her 350-bed hospital, which has been steadily filling with COVID patients after a monthslong lull.

On Sunday, 106 coronavirus patients were being treated at Singing River Health System, a county-owned network of three small hospitals along the Gulf Coast of Mississippi, up from a dozen or so patients at the beginning of the month. With 40% of all COVID-19 tests in Pascagoula coming back positive and about 100 hospital employees out sick, Sison was trying not to think about what the coming days would bring.

“I just don’t know if we can do this again,” she said.

Even as new cases peak and begin to decline in the Northeast and Upper Midwest, the nation’s hospitals are still confronting a crushing influx of patients. In Mississippi, the latest wave of infections has pushed nearly all of the state’s acute-care hospitals to capacity.

At Pascagoula Hospital, the city’s only acute-care health facility, a wave of departures has left 80 unfilled openings for registered nurses, forcing administrators to mothball one-third of its beds. By the end of last week, every remaining bed was full, prompting an alarming systemwide backup. With nowhere else to go, coronavirus patients in the ICU who were well enough to move to another unit had to stay put. Also stuck were several gravely ill patients in the ER who could not be transferred to the ICU, where care is far more exacting.

“The real crisis we’re facing right now is a foundational shortage of nurses,” he said.

The nation’s front-line medical workers were running on fumes even before the arrival of omicron. Successive waves of illness and death have left them exhausted and numb; nearly 1 in 5 have left the profession over the past two years. And they are angry — at the patients who refuse to get vaccinated, at the hospital executives who won’t spend the money needed to maintain safe nurse-to-patient ratios, and at the political leaders who call them “health care heroes” while opposing mask and vaccine mandates that might blunt the tsunami of new infections.

The labor shortage has been especially brutal for the small, nonprofit safety-net hospitals like Singing River where millions of Americans seek care. Financially fragile even before the pandemic, they have been unable to match the lofty salaries dangled by travel nurse agencies and large health systems, further accelerating the personnel drain that threatens their ability to provide quality care. Travel nurses can make more than $200 an hour, far more than the $30 earned by most staff nurses in Mississippi.

“A lot of community hospitals are wondering how they’re going to keep the lights on,” said Tim Moore, president of the Mississippi Hospital Association.

The financial strain has been exacerbated by the refusal of Mississippi and other southern states to embrace Medicaid expansion. For Mississippi, that would mean an additional $600 million in annual federal aid, according to the state economist, and an additional 11,000 new jobs each year, most of them in health care.

Gov. Tate Reeves and other Republican leaders who dominate the state’s government have also resisted calls to devote a significant portion of federal coronavirus relief aid for bonuses that could help stanch health care worker departures.

Kelly Cumbest, 45, a registered nurse who manages patient care in the ER, said that in recent months he had received only one application for 24 openings in his department. “It’s not just omicron that worries us,” he said. “What scares us is that we don’t have people to take care of heart attacks, strokes and car accidents, and that’s something the politicians and general public really don’t understand.”

The staffing crisis at Pascagoula Hospital is not immediately apparent to visitors. Doctors and nurses trade pleasantries and reviews of the day’s cafeteria fare as they dart in and out of patient rooms. But the flashing violet lights above a half-dozen doorways tell a different story: They signal a patient’s unanswered call — for water, for assistance getting to the toilet, or increasingly, a request for helping hands to clean up after they could no longer wait. Sometimes the need is more critical. Deborah Briggs, 64, a newly admitted COVID patient, had tossed off her oxygen mask in a fit of fevered agitation and was struggling to breathe. “I’m burning up,” she gasped as three nurses returned the mask to her face and then lifted her into a position that would allow her lungs to more fully expand.

One of the nurses, Teresa Phillips, sighed and tried to explain the challenge of juggling the complex medical needs of so many patients with 25% fewer staff. “I want to make sure my patients are bathed, given their meds on time and have their vital signs continually assessed, but you can’t do that when you’re stretched this thin,” said Phillips, who had just returned to work after battling COVID for the second time.

When asked how they are holding up two years into the pandemic, nearly every nurse at Pascagoula Hospital grew emotional. Caroline Olivera, 24, a self-described “baby nurse” who landed her first nursing job when the pandemic began, cried as she described the physical exhaustion from endless overtime shifts and the emotional toll of so much death. “You know the expression ‘only the fittest survive’? Well, that’s me,” she said.

A similar resolve is frequently heard among residents of Pascagoula, an industrial port town of 22,000 that is still recovering from the devastation wrought by Hurricane Katrina. For a while, a dogged loyalty to community went a long way in persuading many nurses to stay put, despite wages that are among the lowest in the country and the worrisome rates of vaccination. Just 46% of county residents are fully immunized.

That devotion began to dim during the calamitous delta surge last summer, when administrators were, for the first time, forced to hire travel nurses.

Once the delta wave had receded, many holdouts decided they could no longer resist the monetary lure and began leaving in droves. Some have taken jobs 40 minutes away in Mobile, Alabama, allowing them to remain at home with their families.

“You can’t blame them,” said Jessica Samples, a registered nurse and 14-year veteran of Pascagoula Hospital who is one of the few old-timers left, though she admits she has been tempted to join them.

The departures have had a pernicious knock-on effect, forcing the hospital to hire even more travel nurses and threatening its already precarious finances. On some days, nearly 80% of the nurses on some wards are on short-term contracts, hospital leaders say.

As a result, Singing River has racked up $30 million in additional expenses during the pandemic, Bond, its CEO, said. He and other hospital officials have been pressing Mississippi state leaders to use one-quarter of $1.8 billion in federal pandemic relief funds to provide $20,000 retention bonuses to nurses who agree to remain in the state for two years. Lawmakers have countered with a far less generous proposal that would fund bonuses of around $1,000.

With 2,000 unfilled openings for registered nurses and some of the worse health outcomes in the country, hospital executives worry about Mississippi’s longer-term prognosis. Lowe, of the state hospital association, said he feared that residents would blame health care workers for any substandard of care they experience, antipathy that will turn more people away from the profession. That dynamic was palpable last week as Brandon Russell, 20, a certified nursing assistant, tried to stay chipper as he tended to the needs of nearly a dozen COVID patients. Before entering each room, he had to suit up with a surgical gown, gloves and two masks, even if the task was as simple as switching off a light. After exiting the room, all that protective gear had to be removed. The process was repeated dozens of times a day. The job pays $10 an hour.

Russell, who recently recovered from COVID, said the past few months had led him to abandon his aspiration to become a registered nurse. “I love my patients but I’ll be honest with you, I’m ready to quit,” he said. “It doesn’t help that whenever I bring up nursing school, every single nurse here tells me not to do it.”

Such sentiments pain Sison, 36, the nurse manager, who can seem impossibly sunny as she rallies her staff. Over the past few months, she has lost count of the times she had to console co-workers who were irreparably burned out or reeling from the rapid succession of deaths. One nurse, she said, had a nervous breakdown in her office and later quit.

“You become a nurse to fix people but there have been weeks during the pandemic when it felt like we lost more people than we saved,” Sison said, standing in the hallway with a fellow nurse. They began recalling some of those COVID deaths: the 18-year-old begging for relief as he gasped for air; the 27-year-old father who left behind four children; the elderly man who took his last breath minutes before his family arrived to say goodbye.

“Yes, this is what we signed up for, but people forget that we’re still human and we have emotions,” Sison said. “You try to check it at the door when you go home, but you can’t.” For Sison, the losses have been personal. She was 33 weeks pregnant in March 2020 when the pandemic hit Pascagoula, and after weeks battling a mysterious illness, the child, a boy, was stillborn. Doctors delivered the news the same day the hospital admitted its first coronavirus patient. An autopsy determined that COVID had likely caused his death.

Three weeks later, Sison was back at work. “They were there for me,” she said of her co-workers, “and I wasn’t going to leave them at such a terrible moment.” Just then, an overhead speaker began to play the familiar strains of Brahms’ lullaby. Medical workers up and down the hallway stopped in their tracks. The song marked the birth of a child at Pascagoula Hospital, “a rare moment of goodness,” one woman said.

It reminded them of the days when the hospital played “Don’t Stop Believin’” every time a COVID patient was discharged. At a time of unrelenting darkness, the song was a source of joy and hope.

But that was before, back when most everyone at Pascagoula Hospital believed that science and self-sacrifice would ultimately win the day.

“We thought we’d beat this virus,” Sison said, her voice trailing off. “We don’t play that song any more.”

This article originally appeared in The New York Times.