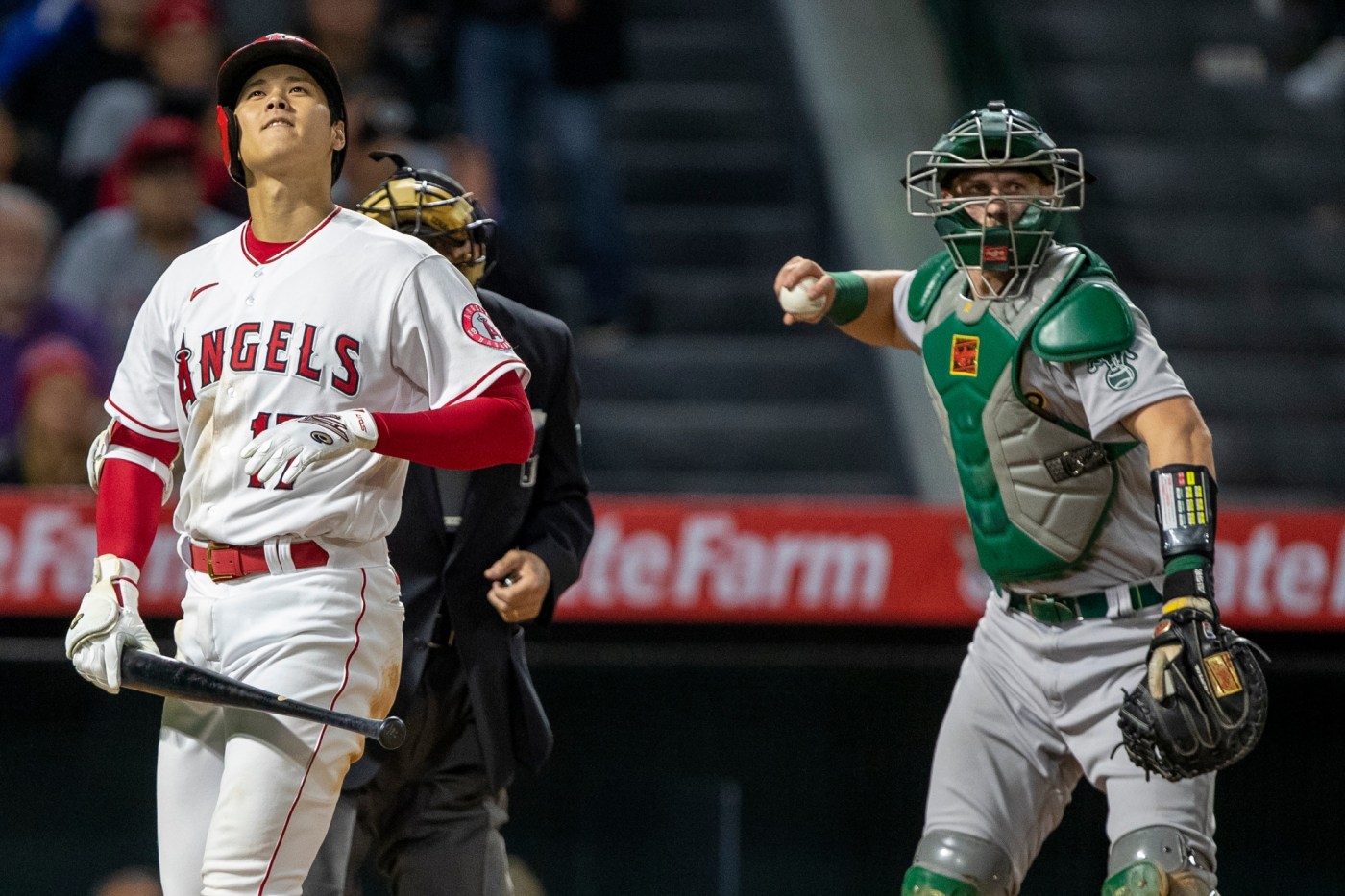 ANAHEIM — Despite all of the encouraging numbers produced by the Angels, there is at least one troubling number that was highlighted during their 4-2 loss to the Oakland A’s on Friday night.

The Angels have been called out on strikes 116 times, the most in the majors. They looked at seven third strikes among their 13 strikeouts on Friday, on their way to a fourth consecutive loss.

Further adding to their issues, Taylor Ward left the game after running into the right field fence making a catch in the ninth inning. Ward was still being evaluated after the game, and the Angels said there would be no updates on his condition until Saturday.

Before he left the game, Ward was one of the few players who didn’t get called out on strikes. They were called out six times in a span of three innings.

Left-hander A.J. Puk got Anthony Rendon looking at a slider on the inside corner for the third strike to lead off the eighth. He then got Jared Walsh looking at a fastball over the outside corner.

“We just have to be a little bit more assertive in the strike zone,” Manager Joe Maddon said. “It’s something that we’ve emphasized from the beginning of the year, and we just have to do a better job of that. The prep is great. The work is outstanding. It’s just up to us to make the adjustment.”

It was a quiet finish for a team that came into the game leading the American League in runs.

“We’ve just got to really do better offensively against them,” Maddon said. “We pitched well, and they pitched well. Bleeding into last year, a lot of our issues with them were that we did not hit them. That’s the primary issue we have playing that team.”

In the first, Rendon poked a two-out RBI single into right to drive in a run. Rendon, who also doubled, has been heating up, with a 1.124 OPS in his last 32 plate appearances. In the third, the team’s two hottest hitters collaborated on a run. Ward led off with a double and then Trout followed with a double, putting the Angels ahead, 2-1.

But that wasn’t enough on a night when Chase Silseth struggled in his second major league start.

Facing the same team that he shut out on one hit over six innings in his debut last week, Silseth gave up three runs in 4-1/3 innings on Friday night.

“I’m pretty hard on myself,” Silseth said. “Lack of execution. When I have a guy 0-2, and I had a couple guys 0-2, 1-2 and I end up walking a guy, that can’t happen. Coming up, you live and you learn. I’m gonna experience it. So now we’re gonna make a change on what I need to do. That’s the only way you learn in life as well. You got to experience something. I experienced getting hit around. I’m going to make a plan and get back in it.”

In the first inning, he gave up a home run to Jed Lowrie and then he allowed the next three hitters to reach before he escaped the bases-loaded jam. He worked around leadoff hits in the third and fourth.

Starting the fifth with 75 pitches, Silseth issued a one-out walk to Lowrie and then Seth Brown yanked a two-run homer just inside the right-field pole. Silseth then hit Ramon Laureano, ending his night with 93 pitches.

“I thought he threw the ball well again,” Maddon said. “The home run got him at the end, a couple of them did, but I like the aggressive nature. I like the stuff. He’s very confident. Seeing him repeatedly in a short amount of time probably helped them a little bit, but he still attacked and actually I thought he pitched really well.”

She’s a poor communicator, so I said horrible things