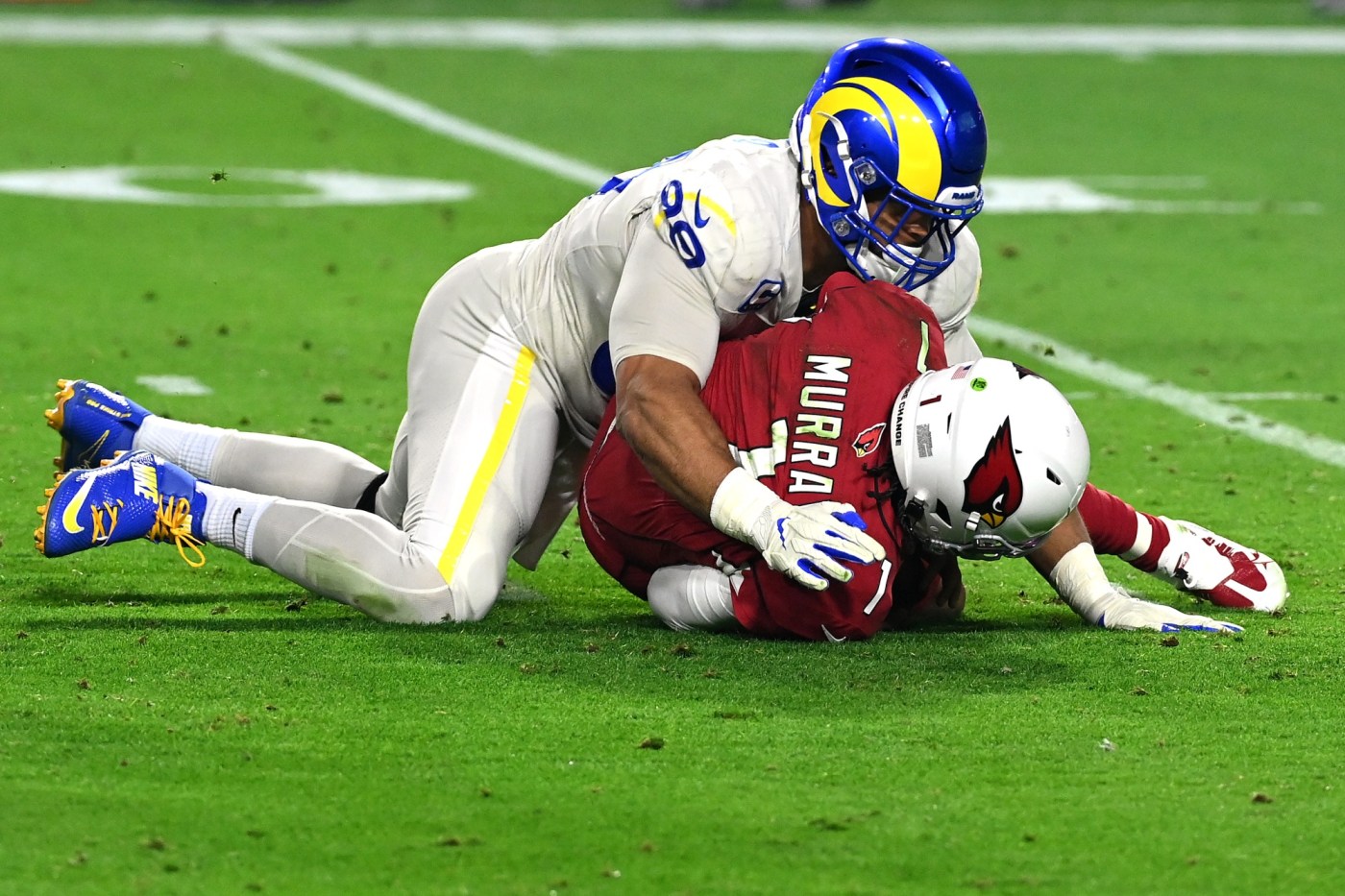 GLENDALE, Ariz. — The NFL is not going to 7-on-7. The NFL will not be postponing games into time slots to be named later.

On field level, they realize this. They know from experience that COVID-19 and its offshoots will be viewed the same as pulled hamstrings. The Rams certainly grasped it Monday night. Unlike every other business, pro football features a surplus of players and a shortage of jobs. Their stand-ins plugged the holes well enough to let the stars stand tall, and created an unlikely 30-23 victory, the Cardinals’ third loss in 13 games.

The Rams are 9-4 and should feel somewhat reassured, going into a late scheduling whirlwind that features Baltimore, Minnesota, San Francisco and Seattle. The defense couldn’t restrain Cardinals quarterback Kyler Murray for four quarters, but it kept batting down his passes and intercepted two, which the Rams turned into touchdowns.

Aaron Donald was monumental, from his sack on the first play until the end of the fourth quarter, when he stood above a fallen Murray. The Cards had recovered an onside kick and Murray made a dash that was called back by Sean Harlow’s holding penalty – on Donald.

Donald also tipped the pass that Leonard Floyd intercepted as Murray was trying to put the Cardinals up, 10-0.

“I’ve seen it from afar and I’ve seen it up close and personal,” Rams quarterback Matthew Stafford said with a grin. “Great players do that kind of thing. I was standing on the sideline and (offensive coordinator) Kevin O’Connell said, well, you never know. He (Murray) might try to fit one in there and we might pick it. And, holy (mackerel), that’s what happened.”

Defensively, the Rams held Murray to a 72.1 passer rating, and cornerbacks Darius Williams and David Long hung in there against a mega-gifted receiving group. DeAndre Hopkins, a rival of Jalen Ramsey’s for so long, caught only five passes for 54 yards in his absence.

Stafford, protected well, put so much oomph into one pass that he looked like an Olympian javelin thrower, and Van Jefferson turned it into a 52-yard touchdown. On their next possession, he got hit by Chandler Jones and the ball squirted away to his right, and as 21 other guys looked up and down and around for it, Stafford sprinted to cover it.

“I was screaming while I was running,” he said.

That meant he could connect with Cooper Kupp for a 27-13 lead three plays later.

“I thought the leadership of this team really came through,” Coach Sean McVay said.

But it was difficult to take all the drives and kicks and penalties seriously, in the face of a problem that is bearing down on two years without a solution, let alone a face.

The Detroit Lions went to Denver on Sunday and lost, 38-10. They were missing six players who had tested positive and were forced to go back to virtual meetings.

The Calgary Flames of the NHL had their Monday game with Chicago postponed, thanks to variants inside their locker room. Ten of the NBA’s Chicago Bulls have tested positive during the past 13 days, and two of their games have been pushed back.

The Bulls were double-vaccinated and received boosters, and their symptoms have been negligible. All-Star center Joel Embiid of the Philadelphia 76ers caught a stronger version of the variant and said he wasn’t sure he would survive.

The NFL is expected to make the booster shot mandatory by Dec. 27. But as all the sports begin to take full houses and crowded beer lines and cheek-by-unmasked-jowl seating for granted, their seasons are being jeopardized again.

It would not be surprising if an alpha quarterback like Tom Brady demanded that his Tampa Bay Buccaneers go into lockdown until the run to the postseason concludes. It also wouldn’t surprise anyone if the NHL got disrupted by cross-border concerns, or if the college basketball season went haywire again. Washington already has punted games against Gonzaga and UCLA.

One assumes the NCAA is looking for contingencies for its tournament, which was entirely confined to Indianapolis last spring. The Los Angeles area has the hotels and the arenas to play host, if it comes to that.

Unfortunately, pandemic fatigue has given way to pandemic denial through much of the country. The NFL plowed through it all in 2021 as if it was trying to show that football and the virus were co-existing facts of our lives. That theory is becoming gospel.

The Rams showed they know the rules. The show, accompanied by the casting calls, goes on.

Bank of the Sierra donates building to South Valley town