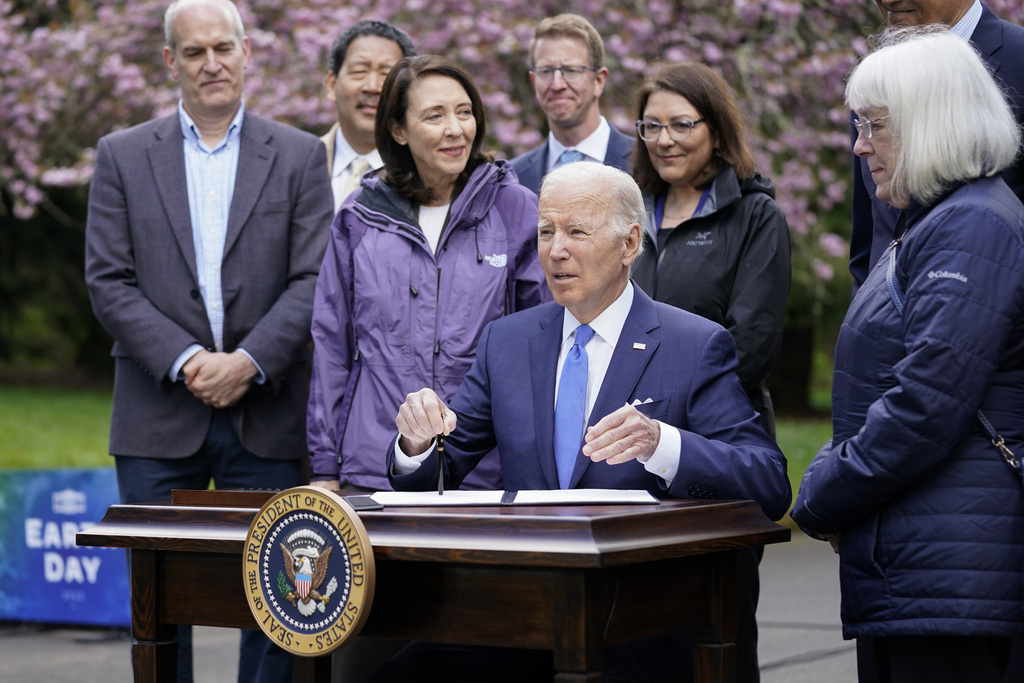 Although Biden has struggled to make progress on his most ambitious climate goals, he drew a sharp contrast with his predecessor, former President Donald Trump, who unraveled the country’s fight against global warming.

“We’ve reached the point where the crisis on the environment has become so obvious, with the notable exception of the former president, that we really have an opportunity to do things we couldn’t have done two, five, ten years ago,” Biden said.

Biden said he was staking his hopes on an up-and-coming generation.

“Every time I get a little down … I just turn on the television or take a look at all the young people,” he said. “This younger generation is not going to put up with all this stuff. No, they’re not.”

Biden detoured into his concerns about getting environmental legislation through Congress, focusing on opposition from Republicans that he described as part of “a MAGA party.” He downplayed divisions among Democrats, saying there are only “two senators who occasionally don’t vote with me,” a glancing reference to Sens. Joe Manchin of West Virginia and Kyrsten Sinema of Arizona.

“My pen is ready,” Biden said. “Get some of these bills to my desk.”

After his speech against a backdrop of flowering trees in Seward Park, Biden sat down at a table to sign his executive order.

Biden’s order directs federal land managers to define and inventory mature and old-growth forests nationwide within a year. The order requires the Forest Service, the Bureau of Land Management and the National Park Service to identify threats to older trees, such as wildfire and climate change, and develop policies to safeguard them.

Old-growth trees are key buffers against climate change and provide crucial carbon sinks that absorb significant amounts of carbon dioxide and other greenhouse gases that contribute to global warming.

The order does not ban logging of mature or old-growth trees, the White House said.

By signing the order, Biden can publicly reassert his environmentalist credentials at a time when his administration has been preoccupied by high oil and gasoline prices following Russia’s invasion of Ukraine. Gas costs have been a drag on Biden’s popularity and created short-term political pressures going into this year’s midterm elections, yet the Democratic president has been focused on wildfires that are intensifying because of climate change.

The measure is intended to safeguard national forests that been severely damaged by wildfires, drought and blight, including recent fires that killed thousands of giant sequoias in California. Redwood forests are among the world’s most efficient at removing and storing carbon dioxide in the atmosphere and provide critical habitat for native wildlife and watersheds that supply farms and communities in the West.

Blazes so intense to kill trees once considered virtually fire-proof have alarmed land managers, environmentalists and tree lovers the world over — and demonstrated the grave impacts of climate change. A warming planet that has created longer and hotter droughts, combined with a century of fire suppression that choked forests with thick undergrowth, has fueled flames that extinguished trees dating to ancient civilizations.

A senior administration official noted that forests absorb more than 10% of U.S. annual greenhouse gases, while also providing flood control, clean water, clear air and a home to wildlife. The official insisted on anonymity to discuss details of Biden’s order before it was made public.

Biden’s ambitious climate agenda has been marred by setbacks, a year after he took office amid a flurry of climate-related promises. The president hosted a virtual summit on global warming at the White House last Earth Day. He used the moment to nearly double the United States’ goal for reducing greenhouse gas emissions, vaulting the country to the front lines in the fight against climate change.

A year later, his most sweeping proposals remain stalled on Capitol Hill despite renewed warnings from scientists that the world is hurtling toward a dangerous future marked by extreme heat, drought and weather.

In addition, Russia’s war in Ukraine has reshuffled the politics of climate change, leading Biden to release oil from the nation’s strategic reserve and encourage more domestic drilling in hopes of lowering sky-high gas prices that are emptying American wallets.

While Biden is raising fuel economy standards for vehicles and included green policies in last year’s bipartisan infrastructure law, the lack of greater progress casts a shadow over his second Earth Day as president.

Timber industry representative Nick Smith said before the order was made public that loggers are worried it will add more bureaucracy to a forest management framework already unable to keep up with growing wildfires due to climate change.

That would undercut the Biden administration’s goal of doubling the amount of logging and controlled burns over the next decade to thin forests in the tinder-dry West, said Smith, a spokesman for the American Forest Resource Council, an Oregon-based industry group.

“The federal government has an urgent need to reduce massive greenhouse gas emissions from severe wildfires, which can only be accomplished by actively managing our unhealthy and overstocked federal forests,” he said.

For many years the Forest Service allowed older trees that are worth more to be logged, to bring in money for removal of smaller trees, Furnish said. But that’s no longer necessary after Congress approved more than $5 billion to reduce wildfire risks in last year’s infrastructure bill, he said. The law includes money to hire 1,500 firefighters and ensure they earn at least $15 an hour.

Timber sales from federal forests nationwide more than doubled over the past 20 years, as Republicans and Democrats have pushed more aggressive thinning of stands to reduce small trees and vegetation that fuel wildfires.

Critics, including many forest scientists, say officials are allowing removal of too many older trees that can withstand fire.

A letter signed by 135 scientists called on Biden to protect mature and old-growth forests as a critical climate solution.

“Older forests provide the most above-ground carbon storage potential on Earth, with mature forests and larger trees driving most accumulation of forest carbon in the critical next few decades. Left vulnerable to logging, though, they cannot fulfill these vital functions,” the scientists wrote Thursday. Former Forest Service Chief Mike Dombeck and Norman Christensen, founding dean and professor emeritus at Duke University’s Nicholas School of the Environment, were among those signing the letter.