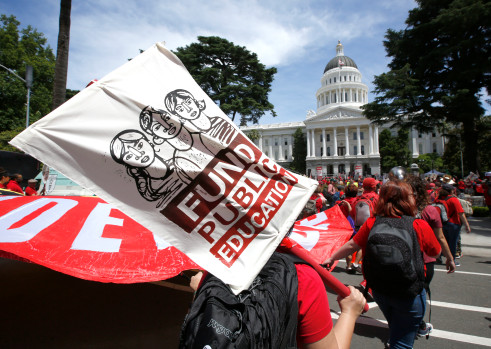 The California Teachers Association just gave a Human Rights Award to a teacher who was fired not long ago for teaching a “Mexican supremacist agenda” and “racism.”

The award is supposed to go to “especially notable” teachers who promote “inclusion, teaching truth, and empowering students and peers” and for their “efforts to unify.” But according to the Whittier Daily News, Guadalupe Carrasco Cardona, a United Teachers Los Angeles member who now serves as the intervention coordinator at Roybal Learning Center in downtown Los Angeles, was fired from teaching ethnic studies at Ellen Ochoa Prep Academy in Pico Rivera. The reason cited for her 2018 termination: among other things, her ties to Union del Barrio, a group of teachers focused on the reunification of Mexico to land it inherited from Spain.

Union del Barrio describes itself as “‘militant’ and ‘socialist,’ seeking ‘to advance the liberation and reunification of Mexico under a revolutionary government, immediately accountable to the people,’” wrote the Whittier Daily News.

Once made public, Cardona’s curriculum drew criticism from the school district’s ethnic studies facilitator. The official noted that “ethnic studies is about celebrating people, culture and humanity, not about pushing an agenda or raising any one ethnicity over another. That, my dear friends of the community, is called racism — not ethnic studies.”

Cardona’s defenders said the backlash was driven by Donald Trump supporters pushing a “white supremacist agenda.” That’s a strange and desperate claim in a city where only 5% of the population voted for the former president. But what exactly was Cardona’s underlying philosophy of enthic studies? On her personal website, she moderates one panel titled: “Beautiful White Co-Conspiratorship,” where she discusses the difference between “white allies” and “white co-conspirators,” which is essentially the difference between having a Black Lives Matter Facebook profile picture and having a “long-term, lifetime commitment to changing the social structures of racism and inequality,” as one guest put it.

The conversation also turned to “decolonizing” for “white folks” and “taking a pass on being white,” the definition of which was so navel-gazingly incomprehensible it could have been conceived only by an academic. To be fair, it was her guests talking, not their host, Cardona, who nodded approvingly and thanked them often.

Trying to elevate the status of disadvantaged groups and celebrating different cultures is a hallmark of American culture — it’s one of the reasons (as the Union del Barrio website weirdly notes), “Every year hundreds die attempting to find a better life north of the border.” And it’s entirely appropriate to condemn White supremacy and all forms of racism. But too often Cardona’s worldview devolves into the paranoid dot connecting that finds nearly everything has its origins in white supremacy.

The urging of White co-conspiratorship is in the same vein as anti-racism philosophy and critical race theory. Of course, the national narrative is that CRT is not being taught in schools. But in a presentation titled “Critical Race Theory: What It Is and What It Isn’t,” Cardona was introduced as about to “share with you how she taps Critical Race Theory without naming it in her classroom.”

Cardona isn’t shy about her racism. When public outrage threatened to scuttle a statewide Ethnic Studies Model Curriculum (ESMC), Cardona blasted them. “All of the attacks against the ESMC came from the realms of whiteness and authoritarian whitesplaining,” she explained in a 2021 presentation on ethnic studies and teacher preparation.

There is nothing inclusive or unifying about attempts to place blame for all of society’s ills at the feet of one race. That, as Cardona’s former supervisor rightly put it, is “racism.”

While the CTA applauds divisive ethnic studies like that which Cardona teaches, a majority of California public school students can’t read or engage in science at an grade level, while math competency is, as the liberal EdSource put it, a “five-alarm fire.” It’s no surprise that the worst results occur among the state’s poorest kids.

Critical Race theorists tell us that we must denounce as “racist” any institution that produces unequal outcomes for poor and minority communities. By that measure, California’s public education system is racist. It’s time we call out the people running this failed system, people like Guadalupe Carrasco Cardona and the California Teachers Association that promotes them.

Will Swaim is president of the California Policy Center and cohost of National Review’s Radio Free California podcast.