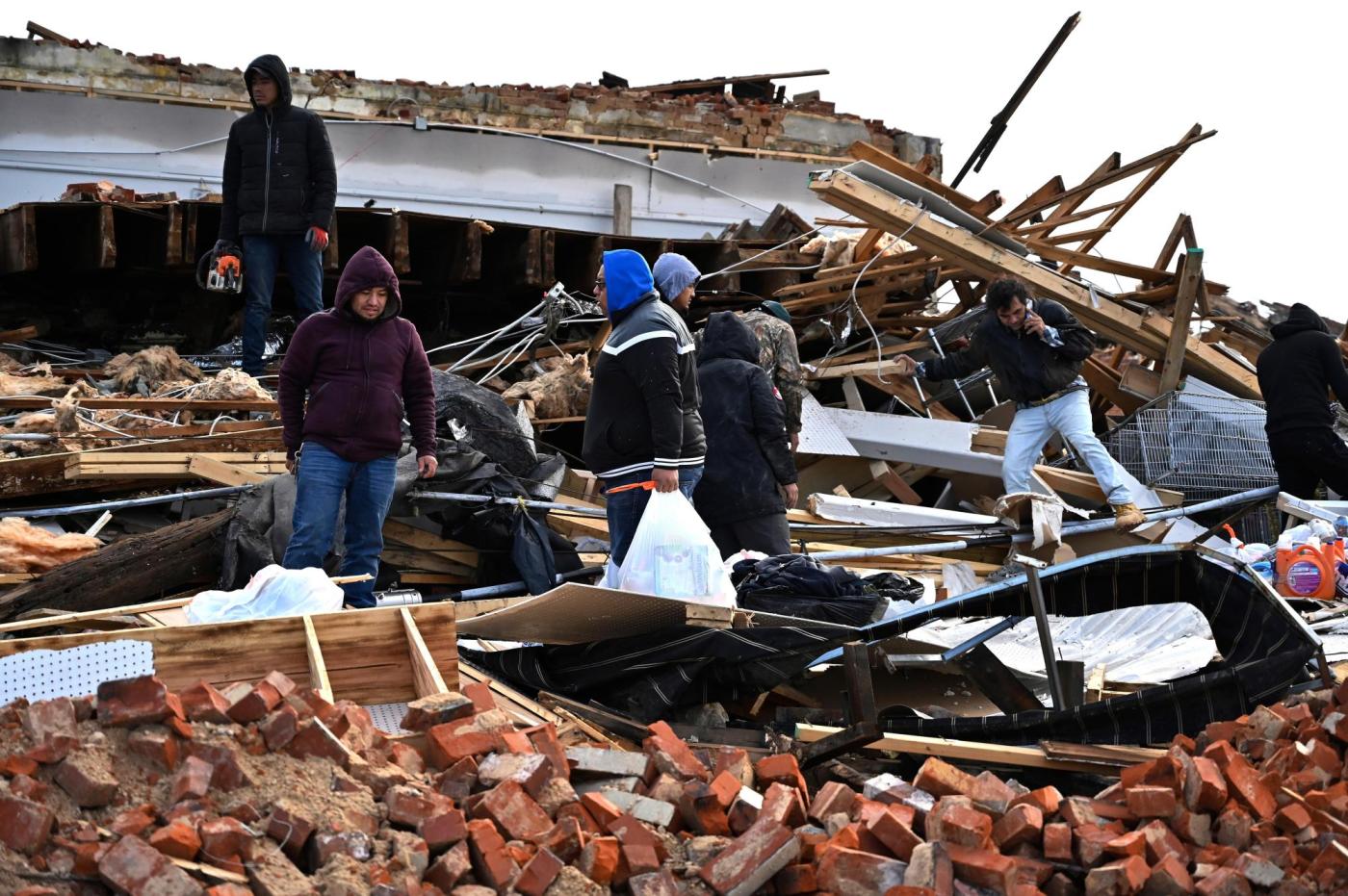 By BRUCE SCHREINER and DYLAN LOVAN

MAYFIELD, Ky. (AP) — Workers on the night shift at Mayfield Consumer Products were in the heart of the holiday rush, turning out Christmas candles, when a tornado closed in on the factory and the word went out to “duck and cover.”

Autumn Kirks pulled down her safety googles and took shelter, tossing aside wax and fragrance buckets to make room. She glanced away from her boyfriend, Lannis Ward, and when she looked back, he was gone.

On Sunday, he was among scores of people missing and feared dead in the rubble of the factory.

With Kentucky’s governor warning that the state’s death toll from the tornado outbreak Friday night in Mayfield and other communities could exceed 100, Kirks and others waited in agony for news of their loved ones while the rescue effort grew bleaker by the hour.

Forty of the 110 people who were inside the factory were pulled out soon after the twister struck, authorities said. Rescuers had to crawl over the dead to get to the living at a disaster scene that smelled like scented candles.

But by the time churchgoers gathered Sunday morning to pray for the lost, more than 24 hours had elapsed since anyone had been found alive.

“It’ll be a miracle if we pull anybody else out of that. It’s now 15 feet deep of steel and cars on top of where the roof was,” Gov. Andy Beshear said on CNN. “Just tough.’

Kentucky was the worst-hit state by far in an unusual mid-December swarm of twisters across the Midwest and the South that leveled entire communities and left at least 14 people dead in four other states.

“I can tell you from reports that I’ve received I know we’ve lost more than 80 Kentuckians. That number is going to exceed more than 100,” Beshear said.

“I’ve got towns that are gone, that are just, I mean gone. My dad’s hometown — half of it isn’t standing. It is hard for me to describe. I know people can see the visuals, but that goes on for 12 blocks or more in some of these places.”

He said that going door to door in search of victims is out of the question in the hardest-hit areas: “There are no doors.” With afternoon high temperatures forecast only in the 40s, tens of thousands of people were without power.

Kirks said she and her boyfriend were about 10 feet apart in a hallway when someone said to take cover. Suddenly, she saw sky and lightning where a wall had been, and Ward had vanished.

“I remember taking my eyes off of him for a second, and then he was gone. I don’t know where he went, don’t have any idea,” she said.

Kirks was at a ministry center where people gathered to seek information about the missing.

“It was indescribable,” Pastor Joel Cauley said of the disaster scene. “It was almost like you were in a twilight zone. You could smell the aroma of candles, and you could hear the cries of people for help. Candle smells and all the sirens is not something I ever expected to experience at the same time.”

The tornado that carved the path of destruction in Kentucky touched down for an extraordinary and potentially record-breaking distance of more than 200 miles (320 kilometers). Eleven people were reported killed in and around Bowling Green alone.

The storm was all the more remarkable because it came in December, when normally colder weather limits tornadoes.

The outbreak also killed at least six people in Illinois, where an Amazon distribution center in Edwardsville was hit; four in Tennessee; two in Arkansas, where a nursing home was destroyed and the governor said workers shielded residents with their own bodies; and two in Missouri.

Debris from destroyed buildings and shredded trees covered the ground in Mayfield, a city of about 10,000 in western Kentucky. Twisted sheet metal, downed power lines and wrecked vehicles lined the streets. Windows were blown out and roofs torn off the buildings that were still standing.

In the shadows of their crumpled church sanctuaries, two congregations in Mayfield came together on Sunday to pray for those who were lost. Members of First Christian Church and First Presbyterian Church met in a parking lot surrounded by rubble, piles of broken bricks and metal.

“Our little town will never be the same, but we’re resilient,” Laura McClendon said. “We’ll get there, but it’s going to take a long time.”