And one is near a familiar name.

Witkoff’s eponymous real estate firm has drawn up plans to redevelop the Shore Club in Miami Beach. The shuttered hotel has reportedly been closed since the pandemic hit and is about 2 miles from the iconic Fontainebleau Miami Beach, whose owner reacquired the one on the Strip from Witkoff early this year.

The Shore Club and the Fontainebleau are both on Collins Avenue, a hotel-lined thoroughfare that runs parallel to the beach in this famed party town.

Witkoff’s company is looking to demolish portions of the Shore Club complex, reduce the number of hotel units, and build a residential tower, according to plans filed this fall with the city of Miami Beach.

The proposal follows the July announcement that Witkoff and Monroe Capital had teamed up to buy a plot of land in downtown Miami for $94 million.

The buyers did not say in the release what they intend to build. But they noted the 4.7-acre site — located near a train station, a pro basketball arena and plenty of high-rises — has zoning that allows for 60-plus stories and a combination of residential, hospitality and commercial uses.

Witkoff previously owned one of Las Vegas’ tallest buildings, buying the Fontainebleau on the Strip in 2017. The $600 million deal raised the prospect that the unfinished hotel-casino — a towering reminder of Southern Nevada’s frenzied real estate boom and devastating crash — would finally open.

He unveiled a new name and plans to open the high-rise but suspended construction last year amid the early chaos of the pandemic.

In a full-circle moment, the Fontainebleau’s original developer, Jeffrey Soffer, acquired the skyscraper in February from Witkoff through a process that lets people avoid foreclosure, property records show, and announced plans last month to open the 67-story project in 2023.

Multiple attempts to get comments from Witkoff’s firm for this story were unsuccessful.

Witkoff, who has a long history of buying and developing real estate in New York City and other markets, is no stranger to South Florida.

He told the Review-Journal in spring 2019 that he lives in Miami. His company, known simply as Witkoff, lists an office in Miami, and his past projects include the 231-room Hilton Cabana Miami Beach.

Soffer, meanwhile, acquired the 1950s-era Fontainebleau in 2005 and unveiled plans for the one on Las Vegas Boulevard that same year, teaming with former Las Vegas casino executive Glenn Schaeffer on the project.

They broke ground in 2007. But soon enough, the roaring real estate market crashed, the economy imploded, and the Fontainebleau’s developers sued several banks in spring 2009, alleging the “unscrupulous” lenders backed out of their commitment to finance construction of the multibillion-dollar resort.

Without the additional funds, the project “cannot be finished and will never open,” the developers warned. 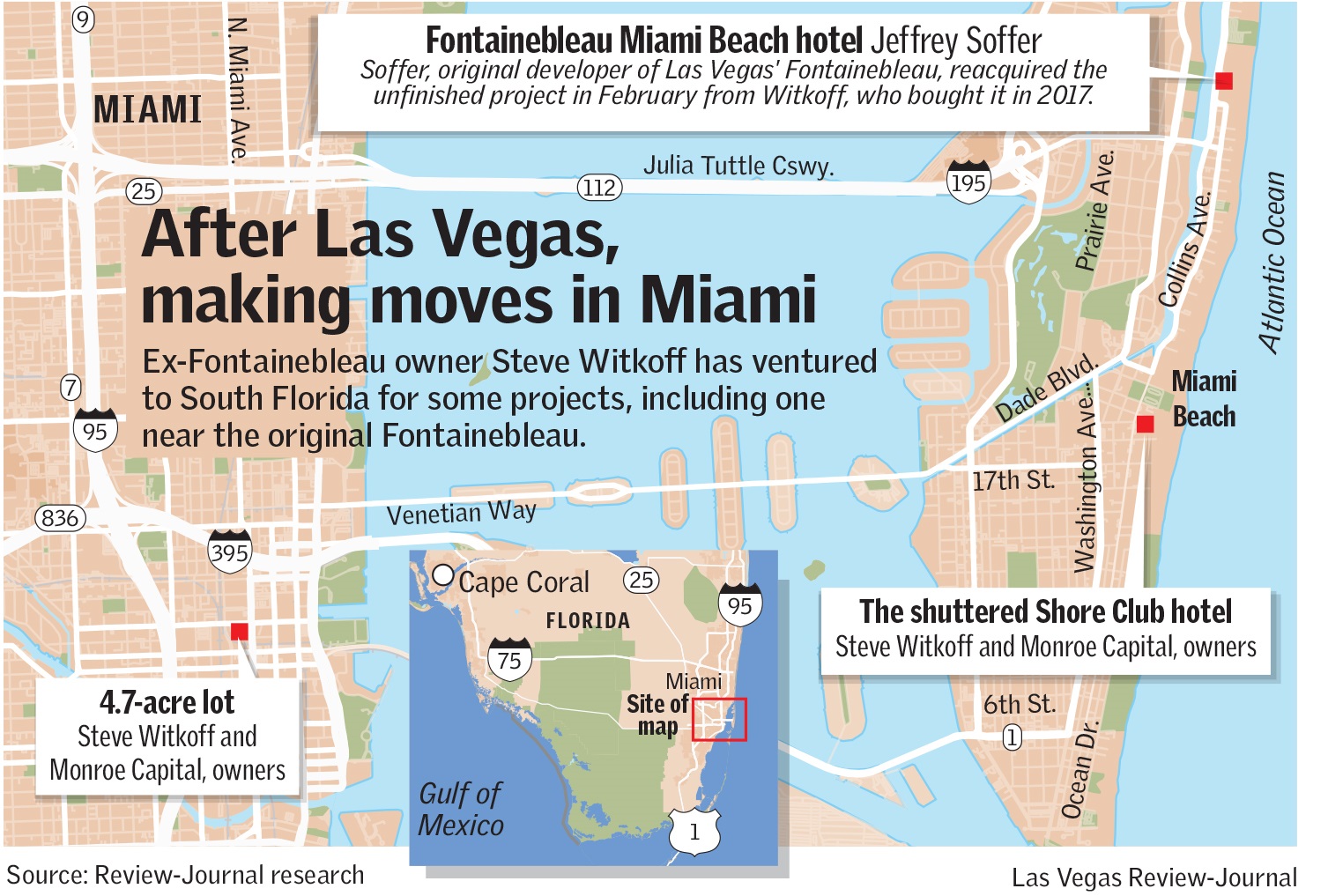 Las Vegas’ Fontainebleau went bankrupt in mid-2009. Billionaire Carl Icahn acquired it in 2010 for around $150 million and sold it several years later for quadruple his purchase price to Witkoff and partners.

In early 2018, Witkoff unveiled the resort’s new name, Drew Las Vegas, and expected opening in late 2020. He later pushed the debut to 2022 and said early last year that he was close to obtaining a roughly $2 billion construction loan for the project.

But in March 2020, as Las Vegas rapidly shut down over fears of the coronavirus outbreak, he suspended construction.

Last month, he spoke at a media event at the newly renamed Fontainebleau Las Vegas.

“It’s kind of a crazy story,” Soffer told the audience, “but I’m back.”