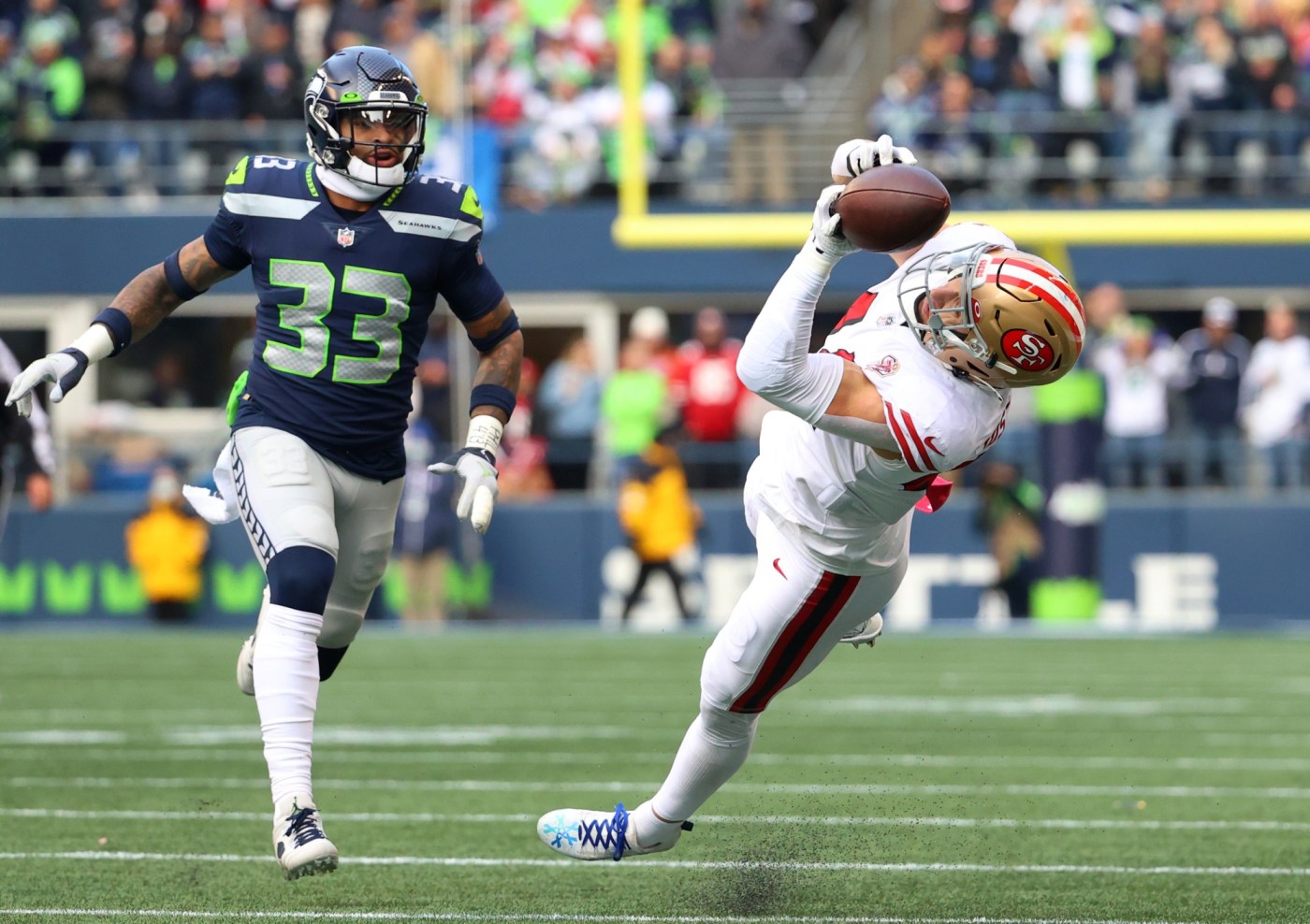 SEATTLE — Of course the 49ers’ fate would be decided in the north end zone.

It’s where their 2019 team clinched the NFC’s No. 1 seed with a goal-line tackle. It’s where NaVorro Bowman sustained a catastrophic injury in the 2013 season’s NFC Championship Game loss.

And it is where, on fourth-and-goal with 22 seconds remaining, Jimmy Garoppolo wanted to throw his final pass. Instead, he took their final snap from the 3-yard line and had his throw blocked at the line of scrimmage by Carlos Dunlap’s left hand.

“We shouldn’t have let it get to that point,” Shanahan said of the final, failed drive.

Ghastly turnovers, scary injuries, foolish penalties, familiar pass coverage woes and far too many special teams snafus ended the 49ers’ win streak at three. Shanahan referred to those gaffes as “self-inflicted stuff.” These were their early-season hallmarks, not the formula for a December playoff run.

This was Seattle, however, and it’s a haunting place where the 49ers (6-6) have now lost 10 of their past 11 visits. This disaster doesn’t cripple playoff aspirations. It certainly serves as a reminder that the 49ers are not the NFC threat as envisioned this past month. With the loss, they dropped to the No. 7 seed in the playoff picture.

About three hours into the latest episode of this still intense rivalry, the 49ers caught a break. Their goal-line defense produced a takeaway, with Azeez Al-Shaair forcing a fumble and Dontae Johnson recovering it at the 2 with 4:03 to spare.

What ensued were big gains offensively, by George Kittle, Elijah Mitchell and Brandon Aiyuk. The 49ers had reached the 7-yard line for the final minute. Then came two Mitchell runs and back-to-back incompletions toward Trent Sherfield, rather than toward Kittle.

Shanahan said the final pass plays were called to target Kittle (9 catches, 181 yards, 2 TDs), but the Seahawks had him double covered, forcing Garoppolo to look to Sherfield, who got held on a third down in the end zone and got open on the fourth-down pass breakup.

Garoppolo finished 20-of-30 for 299 yards with those two touchdowns to Kittle, but also two interceptions in which Shanahan noted “he’s got to be better with the ball.”

The drama-filled game opened in somber fashion when the 49ers’ Trenton Cannon suffered a head injury covering the opening kickoff. His concussion resulted in him leaving the field by ambulance and staying overnight in a local hospital, where he’s listed in stable condition.

The 49ers clearly were missing chemistry as the game ensued, and it’s worth noting here that it was their first game this season without two of their biggest leaders, wide receiver Deebo Samuel (groin) and linebacker Fred Warner (hamstring).

The 49ers go back on the road next weekend for a Sunday date at the Cincinnati Bengals, who will be finishing a three-game homestand that opened with a rout of the Pittsburgh Steelers before Sunday’s loss to the Los Angeles Chargers.

Here are other key takeaways:

Kittle spoke earlier this week about how the 49ers needed to reverse history and beat a Seahawks franchise that had won 16 of the last 19 meetings between the teams. He did his part to try making it 16 of 20.

Kittle scored two touchdowns in the first half: a game-tying 24-yard reception and a 48-yard catch and run along the left sideline. He had a season-high 121 yards (five receptions) by halftime. Also, credit a Jauan Jennings block for helping spring Kittle the final 25 yards on that second touchdown.

He remained Garoppolo’s go-to guy down the stretch. Kittle caught 9 of 12 targets for 181 yards.

Nothing like a takeaway or two to sway the momentum. The 49ers got some luck three minutes into the second half when K’Waun Williams made a goal-line interception of a ball that Gerald Everett bobbled instead of catching for a go-ahead touchdown.

D.J. Jones initially turned the game around in the first quarter by forcing a fumble that Emmanuel Moseley recovered at  the Seahawks’ 24-yard line. The 49ers immediately converted that turnover into a touchdown, Kittle’s first.

The 49ers offense should not have required a flawless performance to beat a downtrodden Seattle team. But mistakes kept piling up, in the form of interceptions, dropped passes, penalties and even an end-zone sack that resulted in a game-tying safety early in the second half.

Tied at 23, Garoppolo converted a third-down pass to Aiyuk for a 21-yard gain, then Garoppolo overshot a double-covered Kittle over the middle for the Seahawks’ second interception of the game.

After Garoppolo’s second interception, the 49ers wanted rookie Elijah Mitchell and their run game to power them like their most recent wins.

Mitchell got cleared from a potential concussion and remained their go-to back. He had 22 carries but for only 69 yards. The only other 49ers to carry the ball where Garoppolo and Kittle. Jeff Wilson Jr. and JaMycal Hasty didn’t get one carry.

The 49ers’ pass defense started strong, or so it looked with sacks by Nick Bosa and Arik Armstead. Emmanuel Moseley also was humming along with a fumble recovery and forcing a third-down stop.

But then Moseley left with an ankle injury, and rookie Deommodore Lenoir struggled in his replacement. Lenoir had a rapid-fire sequence in which he allowed a 33-yard pass to the 4, committed a pass-interference penalty in the end zone on the next play (to set up an Adrian Peterson scoring run), then yielded a touchdown catch on the ensuing series.

This was Lenoir’s most significant workload since the season’s opening three games. Safety Jaquiski Tartt sustained a leg injury on that 33-yard reception, making the secondary an even more inviting target for Wilson.

Dontae Johnson, who replaced Lenoir after halftime, also made a poorly timed mistake. He led with the helmet and drew a personal foul on what would have been a third-down stop with nine minutes to go.

The 49ers’ special teams endured a miserable day, starting with Trenton Cannon’s injury on the opening kickoff that required him to be taken off the field by ambulance with what initially was called a concussion.

The second half also opened with more misery on a kickoff, as Travis Benjamin fumbled it away and the Seahawks recovered at the 26-yard line. Another special-teams miscue: Robbie Gould missed a point-after attempt for the first time this season.

Special teams mistakes doomed the 49ers’ in their home loss to Seattle in October, including a pair of botched kickoff returns by Cannon.