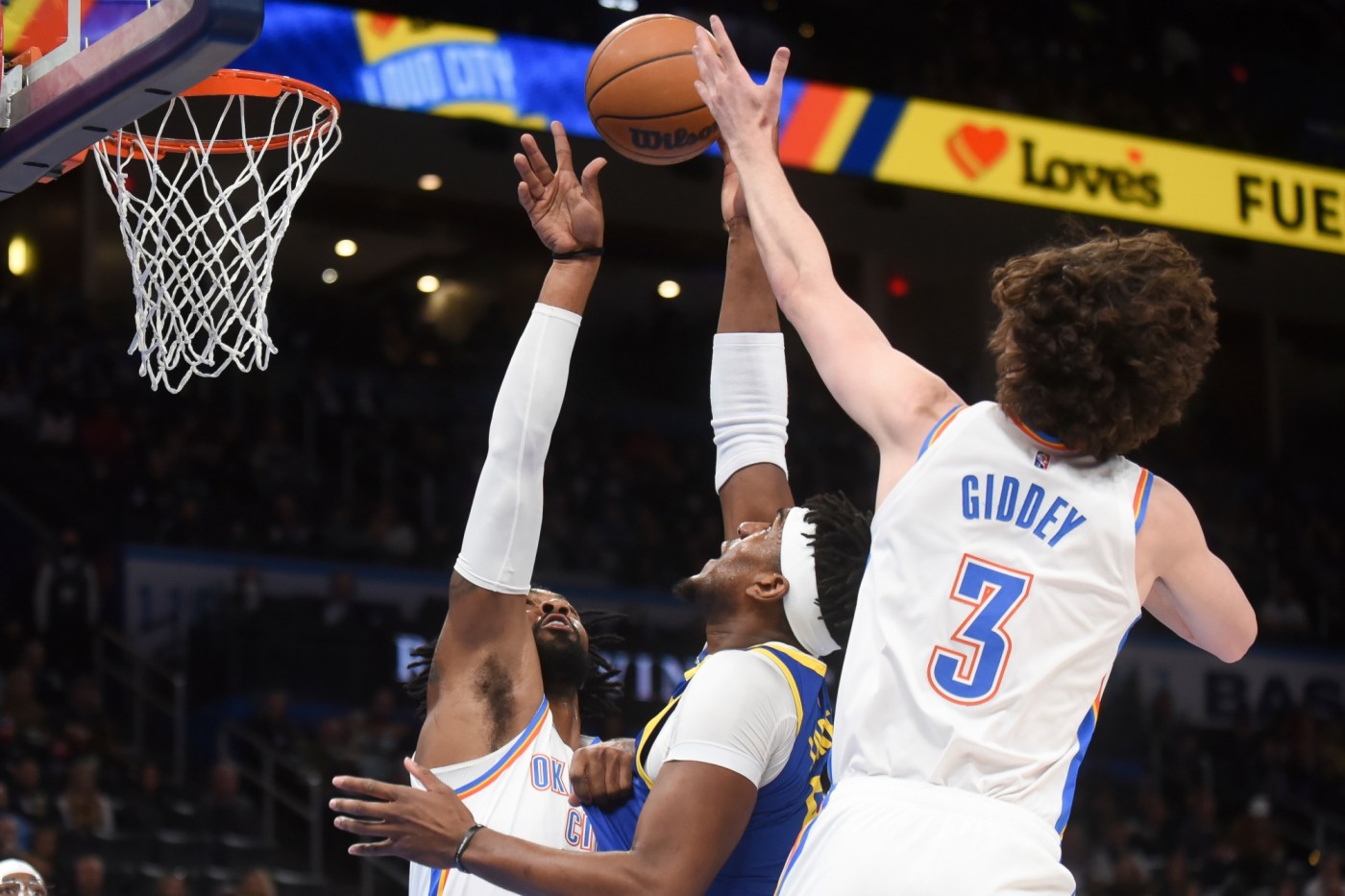 OKLAHOMA CITY — The Warriors’ reserves built their lead, but it was the usual suspects who held on to it for their ninth straight win, 110-98, Monday night over the Thunder.

Klay Thompson nailed a pair of clutch 3-pointers in the final 2 minutes to stem a late run by Oklahoma City and finished with a team-best 21 points in his most playing time since returning from injury.

After trailing for almost the entire first quarter, the Warriors used a 36-23 second quarter to pull ahead for good. Trailing 23-22 early in the period, Jordan Poole turned the corner around a Jonathan Kuminga screen and found himself staring down an open lane. He bolted for the basket and threw the ball down with authority.

Poole growled. Kerr pumped his fist. The Thunder called timeout. The tone for the rest of the night had been set, even if Oklahoma City briefly reclaimed the lead for a few more moments.

The Warriors’ second unit keyed their second-quarter run and only padded their lead after halftime. It was Poole with the first slam, but Kuminga’s pair of putback dunks will lead the highlight reels.

The Warriors got 46 points off the bench, led by 16 from Kuminga and 11 from Poole, who also dished out eight assists (tying a career high) and collected eight rebounds.

Before tipoff, Kerr was asked to evaluate the Thunder and said they were in the throes of a rebuild, an assessment that requires no more evidence than their 17-36 record and second-to-last place in the Western Conference standings.

Yet, the young and athletic Thunder never let Golden State get comfortable. After Klay Thompson sunk a pair of free throws shortly after halftime to widen the Warriors’ lead to 16, the Thunder prevented them from extending it any further.

Thompson was coming off his best game since returning to the court and just received clearance to play up to 30 minutes, but it took until after halftime for his first 3-pointer to fall Monday night.

His final two, though, were the big ones.

Oklahoma City had cut the Warriors’ lead to five on a spinning drive and finish by rookie sensation Josh Giddey when Thompson got the ball at the top of the key on the following possession. He fired and held his follow through while the ball fell through the net.

He followed it with another snipeshot with a hand in his face, officially putting the breaks on an Oklahoma City run that had trimmed a 14-point lead to five in the span of 4 minutes.

Absent any one player assuming a starring role, the Warriors won with an ensemble of scoring. Five players finished in double figures but no one scored more than Thompson’s 21. Andrew Wiggins paced the Warriors through the first half and finished with 15 points.

Thompson was limited to one 3 until the final moments, after sinking seven in his last game against Sacramento. With 18 points, Steph Curry was held below 20 for the 14th time this season but also dished out a game-high 10 assists and finished one rebounds away from a triple double.

Despite that, Golden State scored 110 points for its seventh straight contest and won its ninth in a row, its longest winning streak of the season, with five more winnable games on tap before the All-Star break.