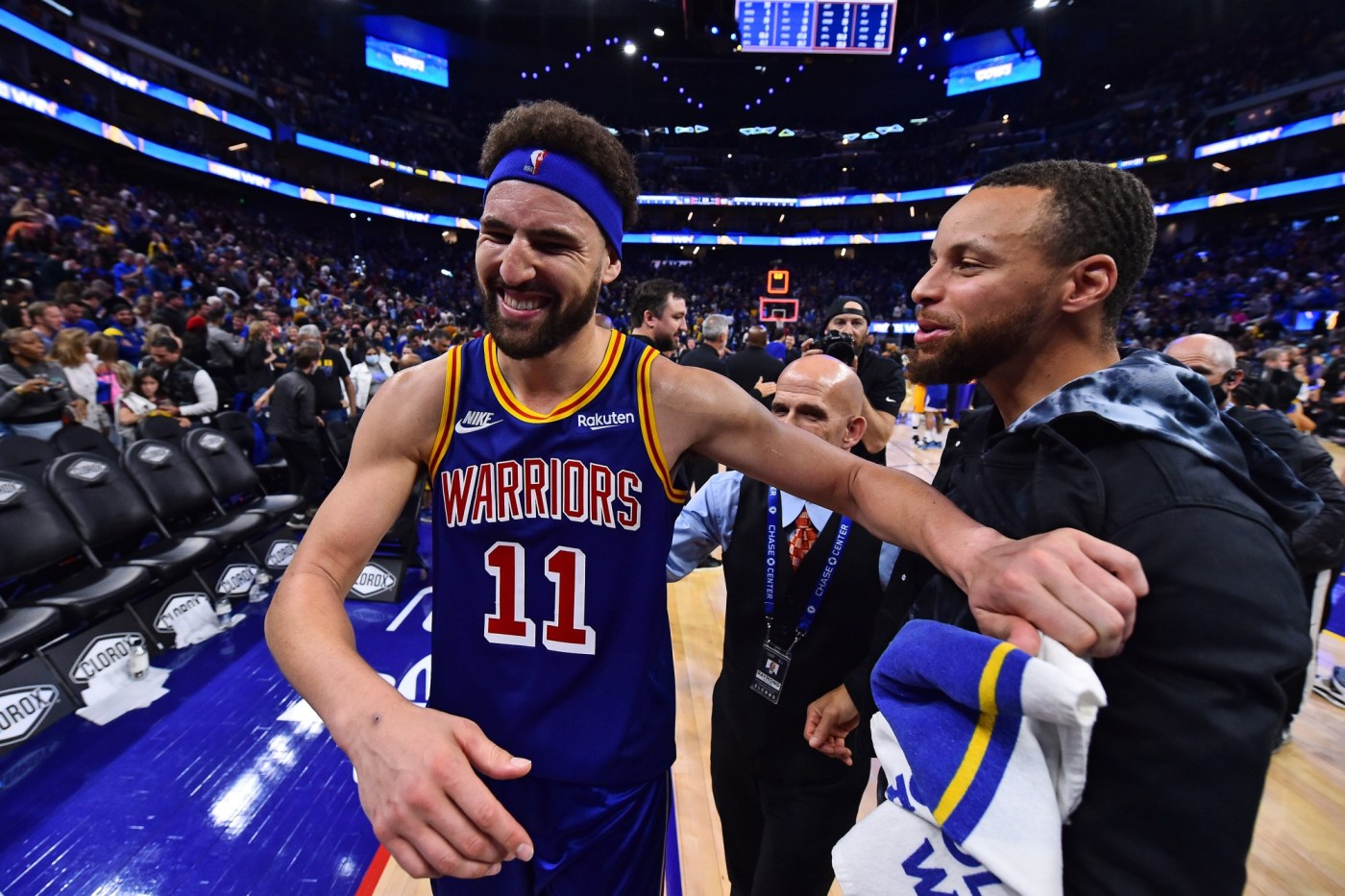 SAN FRANCISCO — Moments after the Warriors’ most important win yet, Klay Thompson and Jordan Poole met at center court and hugged it out.

“They should be happy for each other,” coach Steve Kerr said.

Perhaps they felt a weight lifted; with a 111-107 comeback win over the Utah Jazz, the Warriors finally clinched a playoff spot. It’ll be 22-year-old Poole’s first trip and Thompson’s eighth.

Or maybe they felt a different kind of relief; Amid their worst stretch of basketball yet, the Warriors not only look to have their feet under them without Steph Curry for the remainder of the regular season, but are proving they have plenty of magic on tap to shock the world in the playoffs.

Thompson has been the source for many magical nights for Golden State in their dynastic history. He was magic again on Saturday night, finishing with a team-high 36 points.

The Warriors down 16 points with eight minutes remaining in the fourth quarter, Thompson hit a pull-up 3-pointer on a feed from Poole. A minute later, Thompson eased into a step-back 3 to put the Warriors within seven. Chase Center erupted.

Thirty seconds later, Thompson chucked one from the top of the key off a Draymond Green screen hand-off. Swish. Golden State was down four. Thompson went back-to-back with a falling 3-pointer seconds later to put them within one.

The Jazz played center Rudy Gobert in drop coverage, allowing the Warriors the space to get hot from beyond the arc.

“Not surprised, but I’m grateful,” Thompson said of Utah’s defensive decision. “Not very smart. I’m not explosive to the rim, I just need to chop my feet, rise up when I have the space and I did not let missed shots discourage me tonight.”

Poole’s 3-pointer with just over three minutes left gave Golden State their first and final lead. He treated a raucous crowd to his signature celebration — tongue out, shaking his head with a strut.

With Curry cheering in street clothes on the bench, Thompson and Poole’s late-game execution inspired. Particularly for Thompson, who has been seeing more extreme lows than highs since his return nearly three months ago.

He was just hours removed from a pretty low low, where he shot 1-for-10 from 3 and committed a costly late foul in their loss to Phoenix. He folded paper airplanes at the media podium and waxed poetic about how far he’s come and what’s ahead.

“I told myself it’s one game and I’ll move on,” Thompson said.

Thompson is a different player now than he was during the Warriors’ golden years. Though he still functions with the kind of reckless confidence that has inspired some performances etched in NBA history, his legs and rhythm haven’t matched up.

He’s been hard on himself, pressing his shot at times in desperate search for breakthrough moments that used to come with relative ease.

But his unwavering confidence to shoot the open (or contested) shot even during his coldest streaks gives the Warriors a special kind of edge.

“If it were the other way around, you’d have no chance,” Kerr said before the Warriors’ win. “You know, if you have to motivate people at this level, you’re in big trouble. So I’d way rather have this set of circumstances where a guy is just so competitive and has set such a high bar for himself that our job is to get him to relax a little bit. But you know, he’s just really hard on himself and, and wants to be spectacular every night.”

“When I have nights like this, for me it’s incredibly inspiring that I will get to the level I want to get to,” Thompson said. “I know I’m not there yet, but it’s in sight. I take these nights and I appreciate them much more than I did in the 2010s, I’ll tell you that much.”