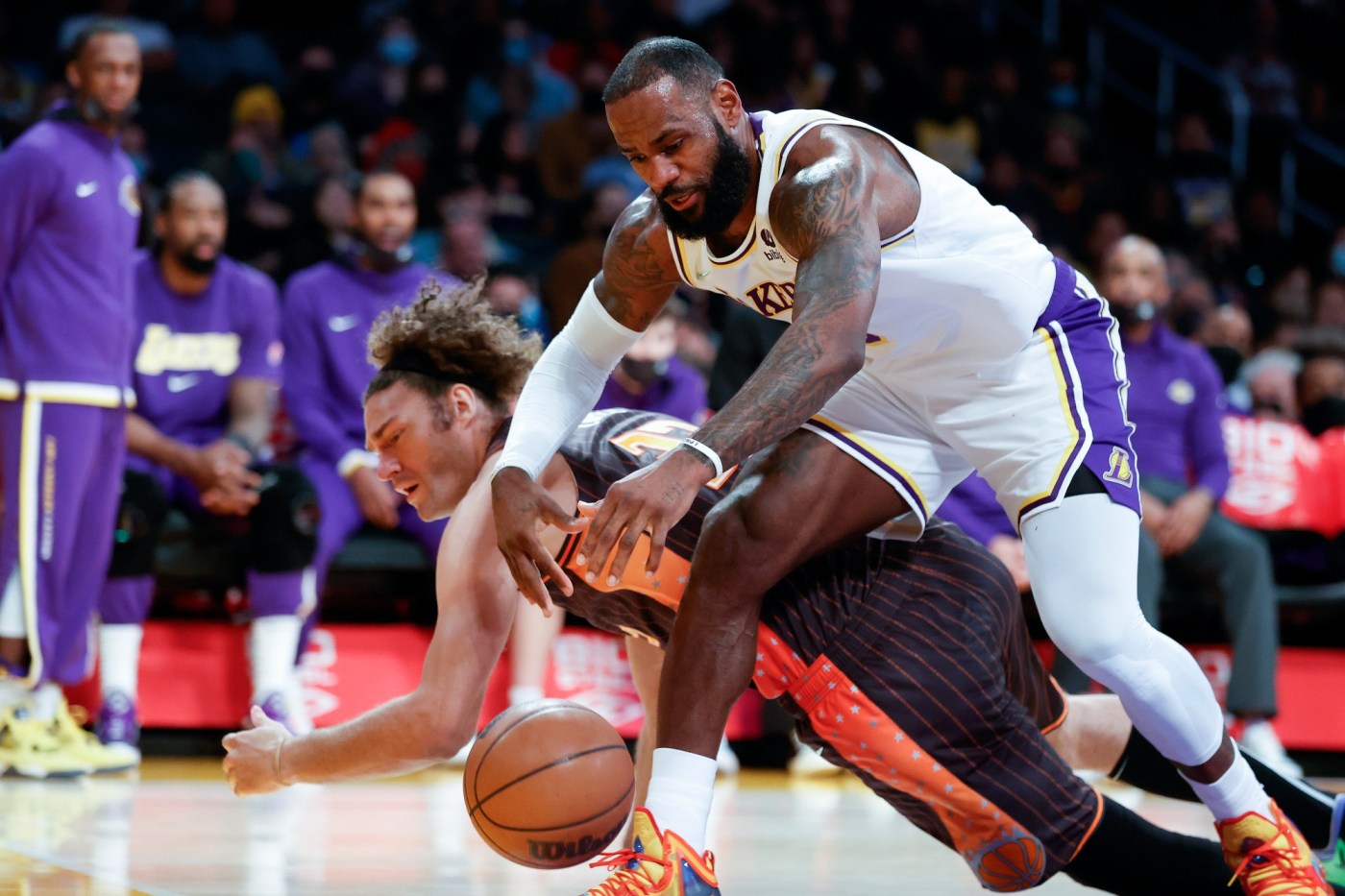 LOS ANGELES – The Orlando Magic are not cleared for flight. Not with LeBron James patrolling the skies.

Those 36-year-old legs still have some lift. James’ shadow loomed over a driving R.J. Hampton, picking his lay-up attempt clean off his fingers. When Cole Anthony thought he had a clear path to a finger roll, James materialized in front of him, swatting the shot into the Magic bench. James got Anthony again minutes later, snarling afterward at the youngster’s audacity for trying to trespass in his airspace again.

It was a two-way masterpiece from James (30 points, 10 assists, 11 rebounds), perhaps his most complete game of the season, and once the Lakers (15-13) saw the energy emanating from their leader, they followed suit to blow by the hapless Magic (5-23) in a dominating 36-10 third quarter on the way to a 106-94 win on Sunday afternoon at Staples Center.

After notching his 101th career triple-double and reminding the Magic of his defensive upside, James crackled with the energy he said had come from watching his 17-year-old son play hoops the night before – as well as nearly 12 hours of sleep leading into the game.

“How do I continue how I’m playing? Been doing it for 19 years,” James said. “Just do what I’ve been doing. I feel like I’m getting better and better each and every day.”

Arguably the most impressive piece was who the Lakers didn’t have: Anthony Davis missed his second straight game with knee soreness, robbing the team of their most versatile defensive player. But they looked stout during a season-best 23-0 run that saw them completely blow by their guests, one of the NBA’s struggling young teams.

The Lakers starting lineup helped drive the run, no one more than James who moved with the urgency of a younger man on the defensive end, then knocked down shots on the other. He got into a personal groove at the start of the third, hitting back-to-back threes, then banking a pair of fadeaway jumpers.

The trickle started to become a downpour when Russell Westbrook found a driving James in the wing, and he managed to catch his balance after landing a rim-rattling dunk.

The third-quarter blowout produced eye-popping figures: The Magic went more than eight minutes without scoring a point, and nearly 10 minutes between field goals. In total, they were 2 for 23 for the quarter, the worst a Lakers’ opponent has shot in a single quarter since 1999. James had as many blocks in the frame as the Magic had baskets.

In addition to his two-way role, James was also cheerleader in chief, gesturing to the crowd throughout the evening to get louder every time the Lakers were on the cusp. A 25-18 first quarter made the audience understandably stand-offish, as the up-and-down Lakers appeared headed for another struggle with an underwhelming foe. For the first half, that was the correct assessment: The Lakers trailed by three at halftime.

That never stopped James from having fun. In the fateful third, when Dwight Howard knocked Wendell Carter Jr.’s one-piece lens from his goggles, James picked it up off the hardwood and placed it on his own face. Even Carter could not stifle a laugh.

“He’s exemplifying joy through hustle, and how it’s really fun to pour it all out there on the floor and inspire your group,” he said. “The effort that he’s playing with out there is inspiring our whole group.”

The show continued into the fourth quarter, when the Magic managed to whittle the Lakers’ once 25-point lead to 10 points with 4:11 remaining. James notched his sixth game in his last eight of 30-plus points with a stepback three and a lay-up on a break off a defensive rebound.

Cole Anthony helped keep things tight with a 3-pointer to again cut the lead to 10, but after a largely cold offensive game, Russell Westbrook helped bring it home in the fourth with 8 of his 19 points in the last frame, including a bucket with two minutes left. Westbrook also finished with 7 rebounds and 5 assists. The one area where he and James were again deficient: They combined for 11 turnovers.

Talen Horton-Tucker asserted himself from the wing, especially with a catch-and-shoot rapport with James, finishing with 19 points including three 3-pointers. But perhaps most impressive were his six steals, plucked out by his lanky arms and giving him a new career high.

The only other Laker in double figures was Carmelo Anthony (13 points). The Magic were led by Cole Anthony (21 points) and Franz Wagner (20).

The back-to-back wins set the Lakers up well for a three-game road trip beginning on Wednesday in Dallas, that loops through Minnesota and Chicago. They’re attempting to do something they’ve yet to do this season: run off a winning streak more than three games.