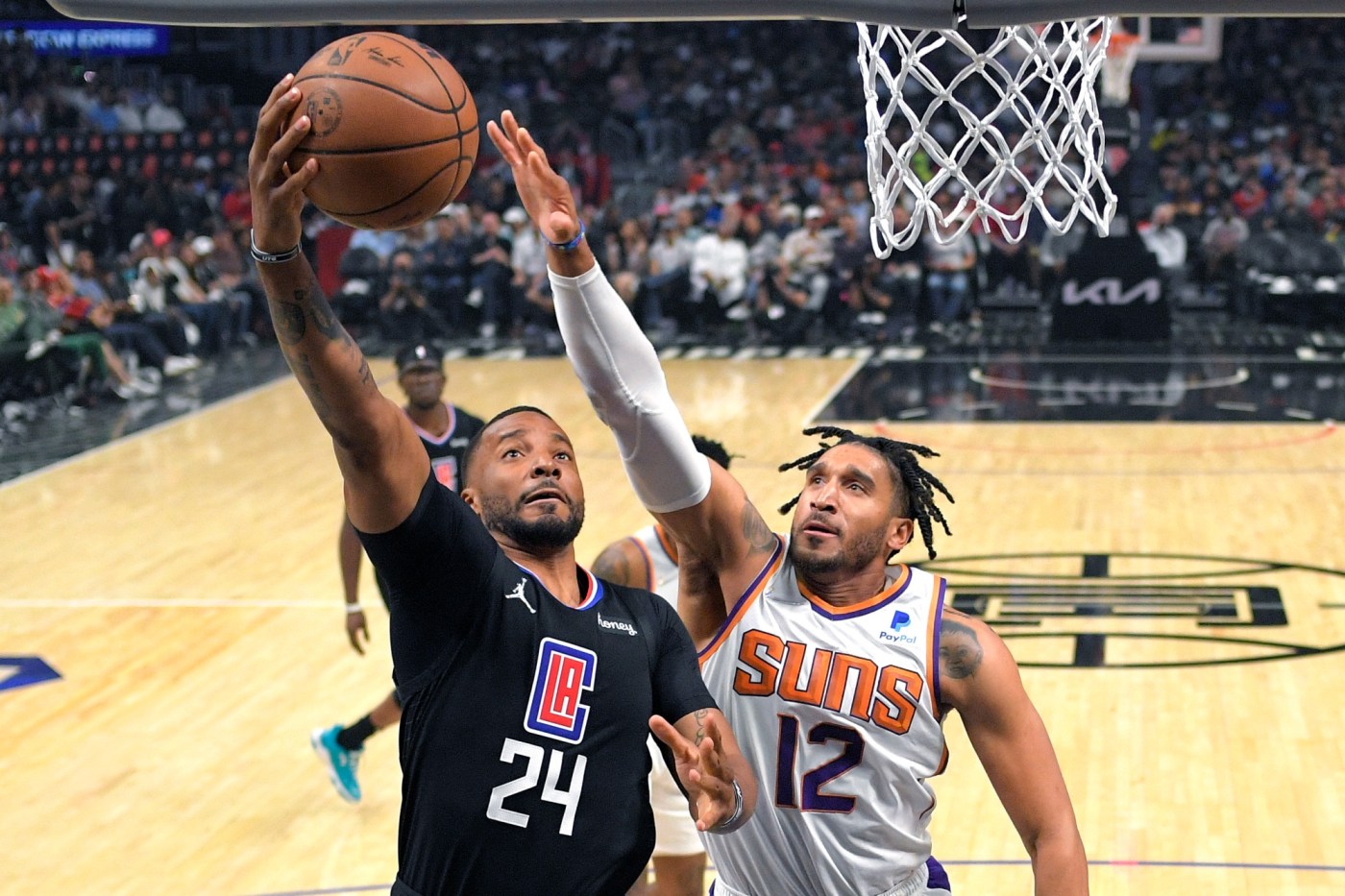 But what they really specialize in are welcome-back parties.

There was Paul George’s return last week, when he scored 34 points to lead the Clippers to a comeback victory over Utah in his first game since Dec. 22.

On Wednesday, it was Norman Powell’s 24-point reemergence in a physical and ultimately tense test against the league-leading though very short-handed Phoenix Suns at Crypto.com Arena, where the Clippers escaped with a 113-109 victory.

“It was fun, I was ready to come back,” Powell said. “I’m excited for what we’re building here. Playing along PG, it still doesn’t seem real to me. He was a guy that I looked up to growing up, a guy, we had some battles in Toronto in the playoffs, and early on in my career he gave me some words of encouragement – my rookie year, that stuck with me.

“So being able to play alongside with him, and Kawhi when he gets back healthy, it’s going to be fun. So I’m definitely looking forward to that. I had a great time out there with the guys, so just looking to build.”

After being sidelined for 22 games with a fractured medial sesamoid bone in his left foot, Powell hit the ground running – connecting on his first six shots before missing his next four, when his stamina started to wane. He connected on three of his four 3-point attempts and went 9 for 10 from the free-throw line.

The former UCLA star scored inside, outside and in between, and used his 6-foot-11 wingspan to secure four rebounds and a blocked shot in 23 minutes.

The Suns (63-17) were playing without four starters, yes, and without reason to exert themselves terribly, having already wrapped up home-court advantage throughout the NBA playoffs.

Locked in as the eighth-place finisher in the Western Conference, the Clippers – who still don’t have All-Star Kawhi Leonard and on Wednesday also didn’t have 3-point threat Luke Kennard, who was sidelined with a sore hamstring – also didn’t need the win, per se.

But with it, they moved back to .500 again, at 40-40, and gave themselves a real opportunity to finish better than .500 for the 11th consecutive season.

“I told this team, ‘Just to get back to .500 with all the stuff we’ve been through, and it’s a credit to the guys in the locker room and the culture that’s been set here and what guys believe in, that no matter who’s playing, we can still win games,’” Clippers coach Tyronn Lue said. “To get back to .500, that’s a big accomplishment for this team this year.”

In his fourth game since returning, George finished with 19 points – nine of them coming on 11 free-throw attempts – and became the 15th active player to eclipse 15,000 points, reaching the milestone when he scored his 13th point in the second quarter.

The achievement elicited a cheer from George’s teammates and the sellout crowd of 19,068 when public address announcer Eric Smith shared the news early in the second half; in response, George formed a heart with his hands to show his appreciation.

“The fact that I was fortunate to play in this league and play for 12 years now, score 15,000 points and just be a kid that came literally from the desert, that’s always what stands out to me,” said George, who is averaging 24.4 points in his 30 games this season.

“Every time I touch the floor, especially because of injuries, I’m always grateful for the opportunities and I feel more and more as these years go on, more and more I appreciate it, what I do.

There was lots for Lue to love – until the Suns went on a late-game run, outscoring the Clippers’ reserves 48-26 in the fourth quarter to cut what had been a 39-point lead to as few as four points with 10.2 seconds left.

“I know they didn’t have their guys tonight, but just for us to come out and build a 39-point lead against a good team and well-coached team, that was huge of us to see,” Lue said. “Now we just gotta be more professional, play the right way through the game instead of getting comfortable.”

They used most of their third-to-last game before the play-in tournament to try an assortment of lineups, including those incorporating Powell and George together for the first time this season.

George missed 43 consecutive games between Dec. 22 and last Tuesday. While he was out, the Clippers acquired Powell and Robert Covington from the Portland Trail Blazers – three games after which, Powell was hurt.

George and Powell give the Clippers much more juice offensively and help bolster what’s been a committed defense much of the season. On Wednesday, they held the Suns to a season-low 31-point opening half, when they shot 28.3% (13 for 46) from the field. The Clippers outscored the Suns 34-9 in the second period, when they held them to 4-for-22 shooting.

But they had to fight to fend off Phoenix down the stretch, as Coach Monty Williams’ squad came charging back in the fourth period, when the Suns shot 18 for 32 from the field and 9 for 17 from 3-point range.

They got within 107-97 with 2:10 left before backup center Isaiah Hartenstein buried a 3-pointer from the top of the arc to give the Clippers a 13-point cushion with 2:05 remaining.

Torrey Craig’s bucket trimmed it to 110-102, and after Robert Covington missed a pair of free throws, Aaron Holiday hit both of his foul shots to cut the margin to 110-104 with 23.8 seconds to play.

Xavier Moon made one of two free throws, but Cameron Payne drained a 3-pointer with 10.2 ticks to go that brought the Suns within 111-107 – a four-point whisper of the NBA’s largest comeback.

Ivica Zubac finished with 13 points and 14 rebounds, Covington had 11 and Reggie Jackson, Terance Mann and Hartenstein each scored 10 points.

“I think we’re starting to play our best basketball right now,” George said. “We’ve been doing a really good job on both ends. But I think more than anything, we just have a good feel going toward these last couple games of what we want to accomplish.”