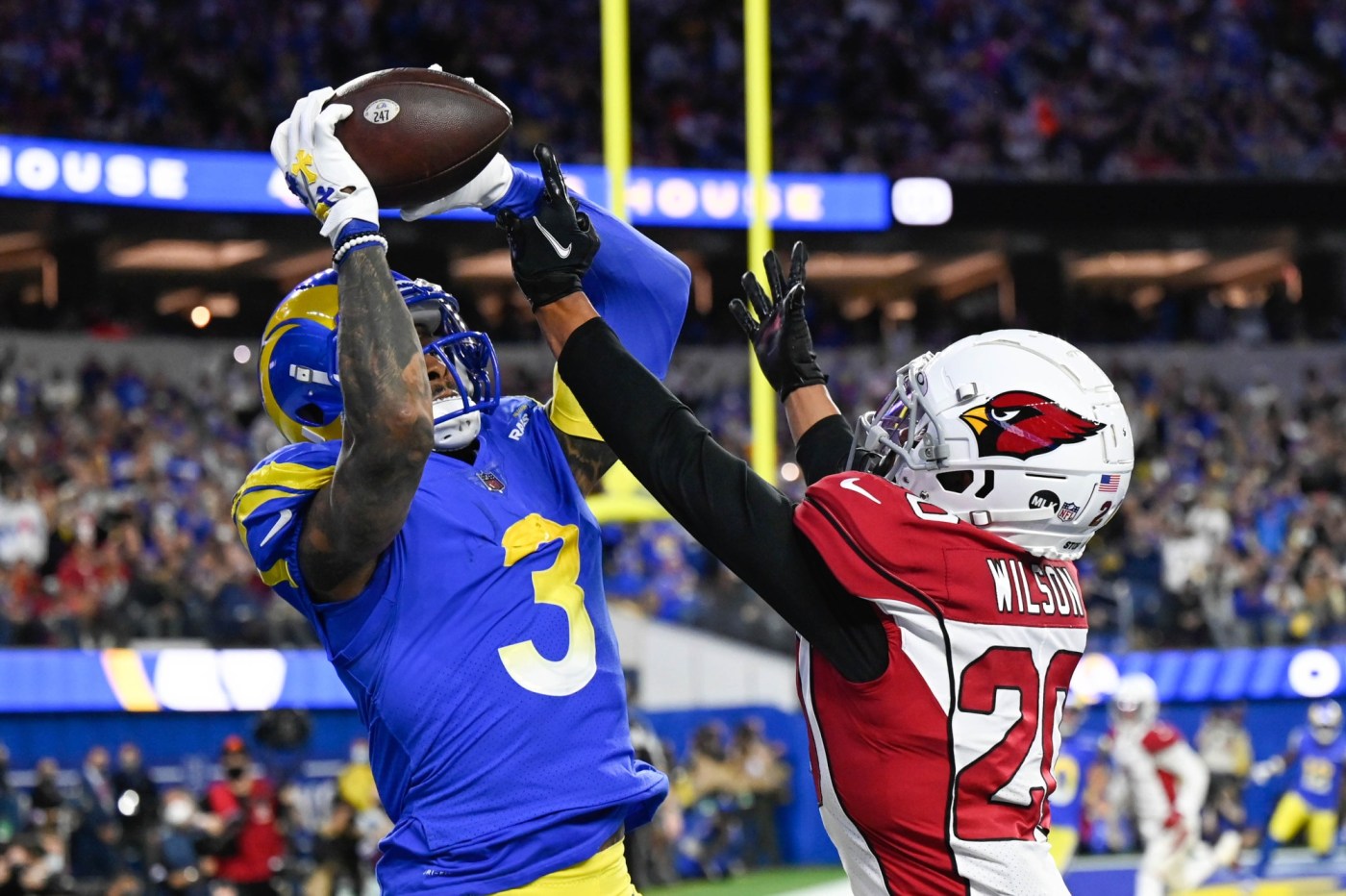 INGLEWOOD — Odell Beckham Jr. kept pointing to his left arm after leaping over Arizona Cardinals cornerback Marco Wilson to catch a touchdown pass on a fade pattern in the corner of the end zone.

Beckham, the Rams’ star wide receiver, was likely gesturing the trendy “ice in my veins” celebration to remind those watching that he does his best work under pressure.

Beckham has been the opposite of cold since arriving in Los Angeles in November after a messy breakup with the Cleveland Browns.

Beckham’s first career postseason touchdown gave the Rams a 7-0 lead in the first quarter of Monday night’s wild-card matchup, but it probably meant significantly more to the wideout who was once recognized as one of the game’s best playmakers before getting lost in Cleveland.

Beckham had seven touchdown catches during his tumultuous two-plus seasons with the Browns, which started with so much promise. Beckham already has six touchdown catches in nine games with the Rams, including Monday’s from quarterback Matthew Stafford. Beckham also had a 31-yard catch to set up another touchdown in the opening half.

Stafford might have had the most to prove in Monday’s postseason game, but Beckham did too and that could explain why he kept pointing to his left arm after scoring the first points at SoFi Stadium. This was Beckham’s first playoff game since his first team, the New York Giants, lost to the Green Bay Packers in 2016.

Beckham couldn’t find consistent success with a star-studded Browns team, which featured quarterback Baker Mayfield, wide receiver Jarvis Landry (his college teammate at LSU) and edge rusher Myles Garrett. Many pundits said the Browns were better off without Beckham after the team advanced to the divisional round of the playoffs last season when he was on injured reserve.

Now Beckham is aiding a Rams squad that desperately needed him after wide receiver Robert Woods was lost for the season with a torn ACL.

Beckham has found a home with the Rams and he’s gotten his career back on track.

It didn’t take long for recently unretired safety Eric Weddle to get on the field.

Weddle received his first snap on the third play of the game and was a part of the Rams’ three-man safety rotation with Terrell Burgess and Nick Scott.

Weddle ended his two-year retirement earlier this week to sign with the Rams, who were thin at safety because of injuries to Taylor Rapp and Jordan Fuller.

Rams linebacker Troy Reeder wore the green dot on his helmet and handled the play-calling duties, which previously belonged to Fuller. Reeder hit Cardinals quarterback Kyler Murray in the end zone and that led to the interception that David Long Jr. returned 3 yards to give the Rams a 21-0 lead in the second quarter.

Miller broke free from Cardinals offensive tackle D.J. Humphries to sack Murray for a loss of 8 yards in the first quarter.

This was Miller’s first playoff game in nearly six years, when his Denver Broncos defeated the Carolina Panthers for the Lombardi Trophy at Levi’s Stadium. Miller played nearly 11 seasons with the Broncos before being traded to the Rams in November.

Cardinals star pass rusher J.J. Watt was officially activated from injured reserve to play in his first game in months.

Watt returned to the field for the first time since injuring his shoulder in October. He was initially diagnosed with a four- to six-month recovery timeline, but he made it back 13 weeks after surgery.

Cardinals running back James Conner was also activated after being questionable with a rib injury.

The Rams played two postseason games last year, but they were both on the road against the Seattle Seahawks and Green Bay Packers. SoFi Stadium opened its doors in 2020 as the home venue for the Rams and Chargers.

The Tampa Bay Buccaneers will host the winner of Monday night’s wild-card matchup.

The Rams have a two-game winning streak against Tom Brady’s Buccaneers, including a 34-24 victory at home in Week 3 of this season. Last season, the Rams won in Tampa Bay, 27-24.

The Cardinals haven’t faced the Buccaneers since 2019, when they lost, 30-27, to a Bucs team that was quarterbacked by Jameis Winston.