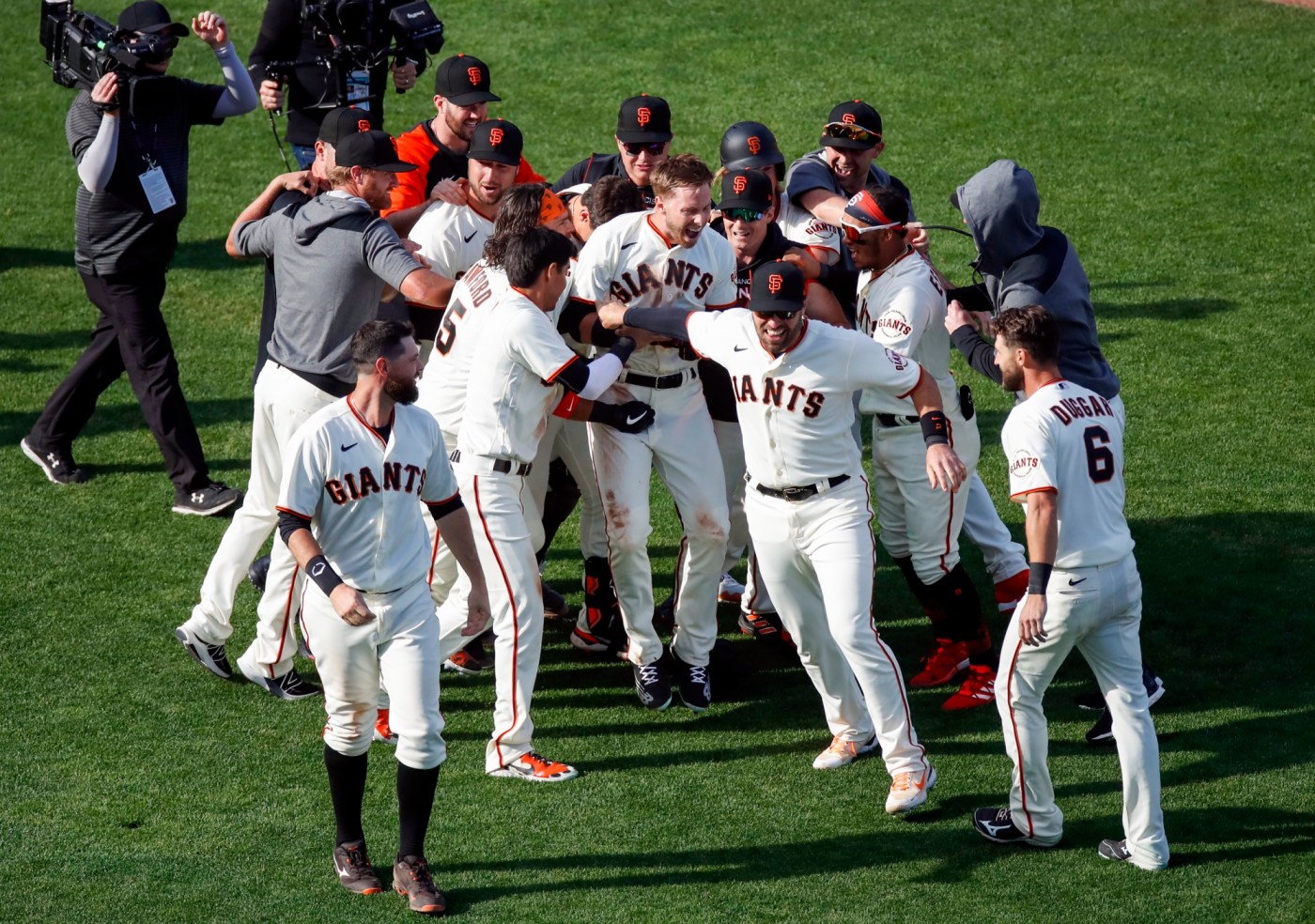 SAN FRANCISCO — For the first time since 2009, the shores of McCovey Cove were rocking on MLB’s Opening Day.

Well, depending on the time of day.

As Logan Webb fired his first pitch at 1:38 p.m., the crowd buzzed with excitement to witness the debut of the Giants’ latest homegrown battery, with Joey Bart on the receiving end. Moments earlier, fans roared for Brandon Belt, who cemented his status as “The Captain,” with a grand maritime entrance. And, as Darin Ruf raced home from first base to score the winning run in the afternoon shadows, they went into a frenzy.

Those highlights provided a stark contrast from the stunned silence that fell over the stadium in the top of the ninth inning.

The 40,853 in attendance on Friday may as well have been cardboard cutouts when Jazz Chisholm’s game-tying home run off Camilo Doval sailed over the left-field wall in the top of the ninth inning. Chisholm’s towering flyball forced the game to extras and set the stage for Austin Slater’s first career walk-off hit.

It was 2009 and the ballpark was named after a telecom company the last time the Giants opened a regular season at home.

It was the same season Tim Lincecum began a streak of 11 straight seasons with a homegrown pitcher starting on Opening Day (retired catcher Buster Posey caught 10 of them). Under bright blue skies on Friday, fans piled in to watch Webb make his first career Opening Day start, throwing to Bart, and possibly bearing witness to the beginning of the next great homegrown battery.

One 25-year-old blanked his opponent for six innings. The other 25-year-old launched the first home run of his career.

If this was supposed to be the start of a new era, the longest-tenured Giant didn’t get the message.

Moments before Friday’s game, Belt, 33, emerged from behind the left field wall in a motor boat being pulled by a pick-up truck that he rode the length of the warning track. Upon arriving to the infield, Belt headed to the mound, where he threw out the ceremonial first pitch to manager Gabe Kapler.

The letter “C” fashioned out of electrical tape that debuted in September of last season at Wrigley Field returned to the left chest of his jersey.

If fans loved Belt’s entrance, then they went even more ballistic in each of his ensuing plate appearances.

Faced with a shift with only one fielder between second and third base in the third inning, Belt squared up a bunt, sprinted down the first base line and forced an errant throw. Bart, who reached on an error two batters earlier, scored all the way from first on the play.

Bart’s blast in the fifth extended the Giants’ lead to 3-0, but Miami had pulled within 3-2 by the next time Belt stepped to the plate. The Captain lifted a pitch just over the arcade in right field, padding the Giants’ lead by a run, and returned to the dugout cupping his hand to form the letter “C.”

Webb, who grew up a few hours northeast of Oracle Park, just outside Sacramento, had a dozen family members in the stands to witness him hold the Marlins scoreless into the seventh inning. After exiting the game, Webb watched from the dugout rail as Dominic Leone served up a meatball to catcher Jacob Stallings, who placed the pitch on the other side of the left-field wall and scored the runner Webb walked to begin the frame.

Though it arrived eight days after Opening Day was previously scheduled, the festivities Giants fans witnessed Friday helped make up for a harsh winter. Fans heard and saw the bickering between owners and players, who were embroiled in a labor dispute that locked out the sport for 99 days.

Upon the return of live action, fans rejoiced in their chance to live and die again with Giants baseball.

The ballpark’s collective heartbeat stopped in the top the third, when Webb collapsed while covering first base. The boo birds came out when Darin Ruf was picked off second base in the first inning. And the crowd erupted as Ruf raced home from first base on Austin Slater’s rip down the left field line in the 10th inning.

It wasn’t without drama, but fans exited Oracle Park glowing, cheering on a club with a 1-0 record.