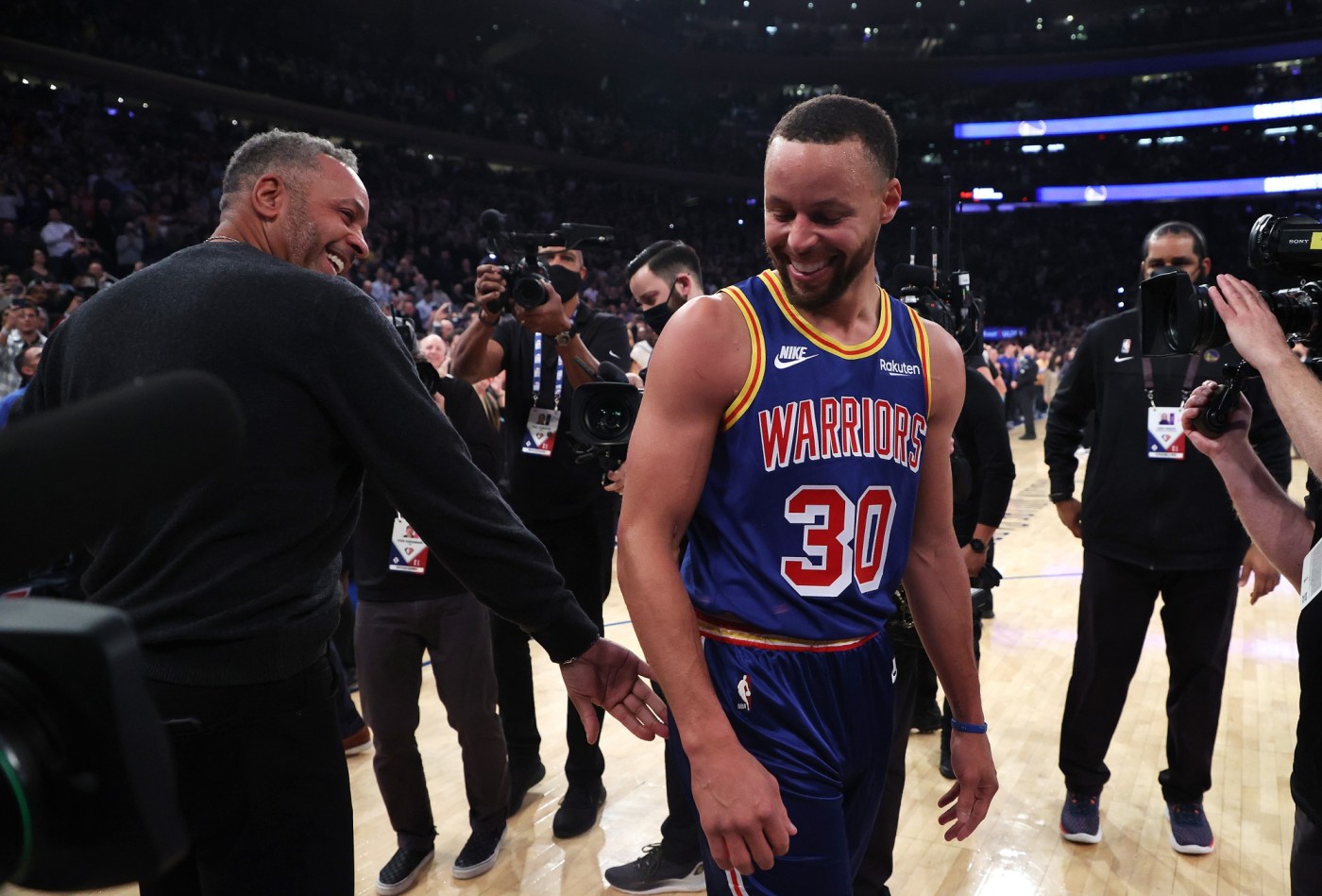 NEW YORK CITY —Steph Curry made history Tuesday night at Madison Square Garden. The emotional moment — the payoff of a lifetime of work and a week he described as one of the longest ever — is best told through the perspective of those who lived it.

Below, the moment’s primary architects — Curry, Draymond Green, Andrew Wiggins and coach Steve Kerr — recount their view of Curry’s record-breaking shot, the celebration and the aftermath.

With 7:33 left in the first quarter, Curry had already tied the record. Draymond Green possessed the ball at the top of the left wing. He jump-passed it to Wiggins in the post, who shot it right back out to Curry on the opposite wing.

Wiggins: “On that play, it’s a bucket first. But I see Steph with a little bit of space and a chance to make history. So I gave it up and he made his shot.”

Green: “Wiggins never passes out of that play, never. And if he does, it’s to me at the top of the key.”

Curry: “We run that play a lot and that’s the first time I think he’s ever made that pass. … I kind of floated back to the 3-point line. I didn’t think I was getting the ball, and then he hit me.”

Wiggins: “If he has a little bit of space, I knew it was going to go up. Every shot he takes you think is good. So that’s what I thought. I was ready to celebrate.”

Curry: “I thought about nothing, and I just let it go. After that, the emotions started to kick in.”

Green: “I was on the court with my hands up, so that was good enough to me, just to be there and witness it.”

Steve Kerr: “The moment was spectacular. It was an incredible shot. It was kind of a fadeaway high arcing 3 so the degree of difficulty was there. The crowd was anticipating it.”

Curry: “The crowd started to slowly stand up, and then there was a buzz, so I didn’t want to rush it. That’s when you can kind of get in your head and force the moment. … I shot it, I backtracked and I saw my pops on the side, saw my teammates going crazy, felt the whole buzz of the whole arena. So it was special.”

Kevon Looney committed a foul to stop play, and Kerr called timeout, a plan he hatched by himself prior to the game. The break in the action lasted a few minutes, longer than the typical timeout.

Curry: “I didn’t really realize we were going to foul and call timeout and all that.”

Kerr: “I was hoping we weren’t going to be in the bonus when it happened because I didn’t want to give them two free throws. It just felt like the right thing to do.”

The first person Curry celebrated with was Green, his teammate of 10 years and frequent assist-man. The two shared an extended embrace around halfcourt, before Curry went off to find the numerous other important people in his life: dad, Dell; mom, Sonya; basketball idols and previous 3-point kings, Ray Allen and Reggie Miller.

Kerr: “The aftermath was more emotional than I expected it to be. … Those guys are in that locker room everyday together and they’ve been together for a decade. They’re the heart and soul of the team. So it was really beautiful to see them out there together.”

Curry: “I don’t know how long it was in real time, but it felt like an eternity. … I can’t say enough, I appreciate so much how the fans embraced the moment with me and just let me kind of get lost in it. … In a way, it felt like we were at home.”

That Curry’s milestone came at Madison Square Garden, the “mecca” of basketball, where he had his first show-stopping performance with 54 points in 2013, was only fitting. With Allen and Miller sitting courtside, it only added to the gravity of the moment.

Green: “I don’t think there was any better place in the world where it could have happened than in Madison Square Garden.”

Curry: “It was a special atmosphere. I knew the Garden would deliver in terms of just how iconic this place is.”

Green: “Anytime you have the opportunity to play in the Garden, it’s special. When you have an opportunity to break an all-time record here, that takes things to new heights.”

Kerr: “It couldn’t have gone any better. To have Ray and Reggie here, to do it in the Garden in front of these fans, just great basketball fans who appreciate the game so much. The atmosphere at the Garden is second to none, so for it to happen here was really special.”

Curry: “Hopefully everybody who was in this building can hopefully tell stories for a long time.”

When he entered the locker room after the game, Curry was met with an ice bath and pleas for a speech from his teammates. Video from inside the room provides an exact transcript of his speech.

“We got a lot more 3s. A lot more wins. A lot more stuff to go. But I appreciate y’all making this special because this has been a long week getting over this milestone (laughs). Having Reggie and Ray here was special, but nothing more special than everybody in this locker room. Let’s keep this energy going.”

Wiggins: “Steph is a humble superstar. Since being on his team, I’ve just learned a lot and learned to really appreciate him as a basketball player but also a person outside of basketball. Just how he carries himself and how he cares for others. And in his speech, he was just thanking other people on his big night. It says a lot about him.”

Kerr: “I think Steph in the locker room was vintage Steph. Joyful, grateful. … He is who he is. He’s so authentic, so genuine. I thought the night was perfect. It just pretty much encapsulated who he is.”

Now at the mountaintop, Curry can finally say what everyone else has known for some time.

Green: “It’s been a long time coming, 13 years in the making for him.”

Curry: “I never wanted to call myself the greatest shooter until I got to this record.”

Kerr: “There have been figures along the way who have sort of pushed the ball forward. But Steph is the guy who just grabbed it and ran with it. He’s changed the way the game is played and how young players think about the game. The way the entire league feels about the shot. There were 82 3s taken tonight. On a night when he broke the record, the sum of both teams’ 3-point attempts was kind of a testament to Steph’s impact on the league, too.

Wiggins: “Steph is GOATed. Greatest shooter of all time. Today just stamps that.”

Green: “I think he’s still getting better, which is scary. But to have that behind him already, I think it really, truly acknowledges what we’ve all been saying: he’s the greatest shooter of all time.”

Curry: “I’m comfortable saying that now. … I got that now, baby.”