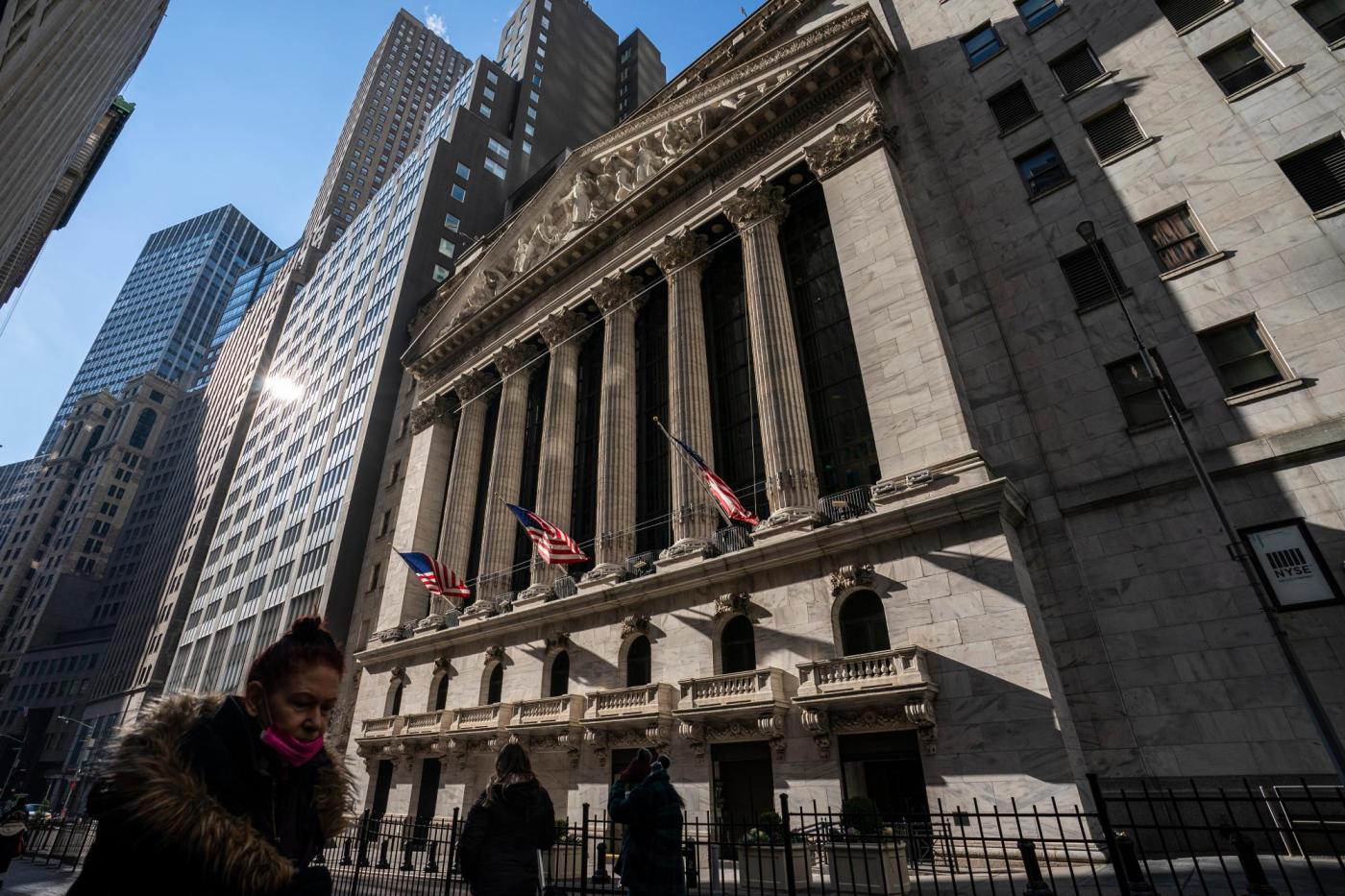 By STAN CHOE and ALEX VEIGA

Stocks notched broad gains Monday, but still posted their worst monthly loss since the early days of the pandemic, as Wall Street closes a tumultuous January wracked by worries that imminent interest-rate hikes will make everything in markets more challenging.

The S&P 500 came back from an early dip to close 1.9% higher. Even so, the benchmark index fell 5.3% in January, its worst month since falling 12.5% in March 2020, when it hit bottom after the pandemic suddenly shut down the global economy.

The Dow Jones Industrial Average rose 1.2% and the Nasdaq composite climbed 3.4%, its biggest single-day gain since early November 2020. Both also ended in the red for January, with the Dow shedding 3.3% and the Nasdaq losing 9%.

Wall Street was shaken this month as investors tried to get ahead of a strategic pivot by the Federal Reserve, which is about to start withdrawing the tremendous stimulus it’s pumped into the economy and markets. Investors expect the Fed to begin raising interest rates in March, among other moves to make borrowing money less easy.

But uncertainty about how sharply and how quickly the Fed will move has helped cause severe swings on Wall Street. Morning drops for stocks have quickly given way to sharp losses in the afternoon, and vice versa. On Friday, a sudden upturn in the last hour of trading managed to keep the S&P 500 from logging its fourth weekly loss in a row. On Monday, the index reversed an early decline of 0.4%.

“There’s systematic buying that goes on at the end of a really bad month like January, and that’s certainly taken place over the last day or two,” said Scott Lander, chief investment officer at Horizon Investments.

The month’s heaviest losses have concentrated on parts of the stock market seen as the most expensive. Much of the focus has been on high-growth technology stocks, which were absolute stars of the pandemic amid expectations they can grow regardless of the economy.

Tech stocks in the S&P 500 rose 2.7% Monday. The sector ended the month down 6.9%. The monthly drop was far deeper for tech stocks like chipmaker Nvidia, which jumped 7.2% Monday, but posted a 16.7% skid for January.

The stock market has historically had at least some difficulty adjusting to higher rates. When bonds pay more in interest, investors feel less need to reach for stocks and other riskier investments in search of returns. This time, the Fed is also turning off what’s colloquially known as the “money printer” it’s been using to buy bonds to keep longer-term rates low, and it will likely soon remove some of those extra dollars sloshing around the economy.

The market may have an even tougher time than usual with this rate-hike campaign, because the Fed is going to be moving when growth for the economy and corporate earnings may be set to slow, say strategists at Morgan Stanley.

They pointed to what they see as worrying signs in data about U.S. manufacturing, among other factors.

Others on Wall Street aren’t as pessimistic. That’s in large part due to broad expectations that corporate profits will continue to grow. For the full year of 2022, analysts are forecasting S&P 500 earnings will rise 9.5%, according to FactSet.

Stock prices have tended to track corporate profits over the long term. And if profits can continue to rise steadily, that could make up for one of the traditional effects of higher interest rates brought by the Fed: stock investors paying less for each $1 of corporate earnings.

“By now it should be clear that the strong pivot in monetary policy will make this year very different from last year,” Solita Marcelli, UBS Global Wealth Management’s chief investment officer, Americas, wrote in a recent note. “Still, we think investors should not lose sight of the fact that the economy remains strong, which should limit downside from current levels.”

The Fed seems to have license to act more aggressively, with inflation at its highest level in nearly 40 years and the job market looking strong.

Investors are debating whether the Fed will raise short-term interest rates by only a quarter of a percentage point in March, the amount it usually does, or a half-point. They’re also building up their expectations for how much the Fed will increase rates over the course of 2022.

Economists at BNP Paribas recently said the Fed may raise short-term rates by 1.50 percentage points this year from their record low of nearly zero, for example. That would translate to six increases of a quarter percentage point. Before that, it had been forecasting only four increases.