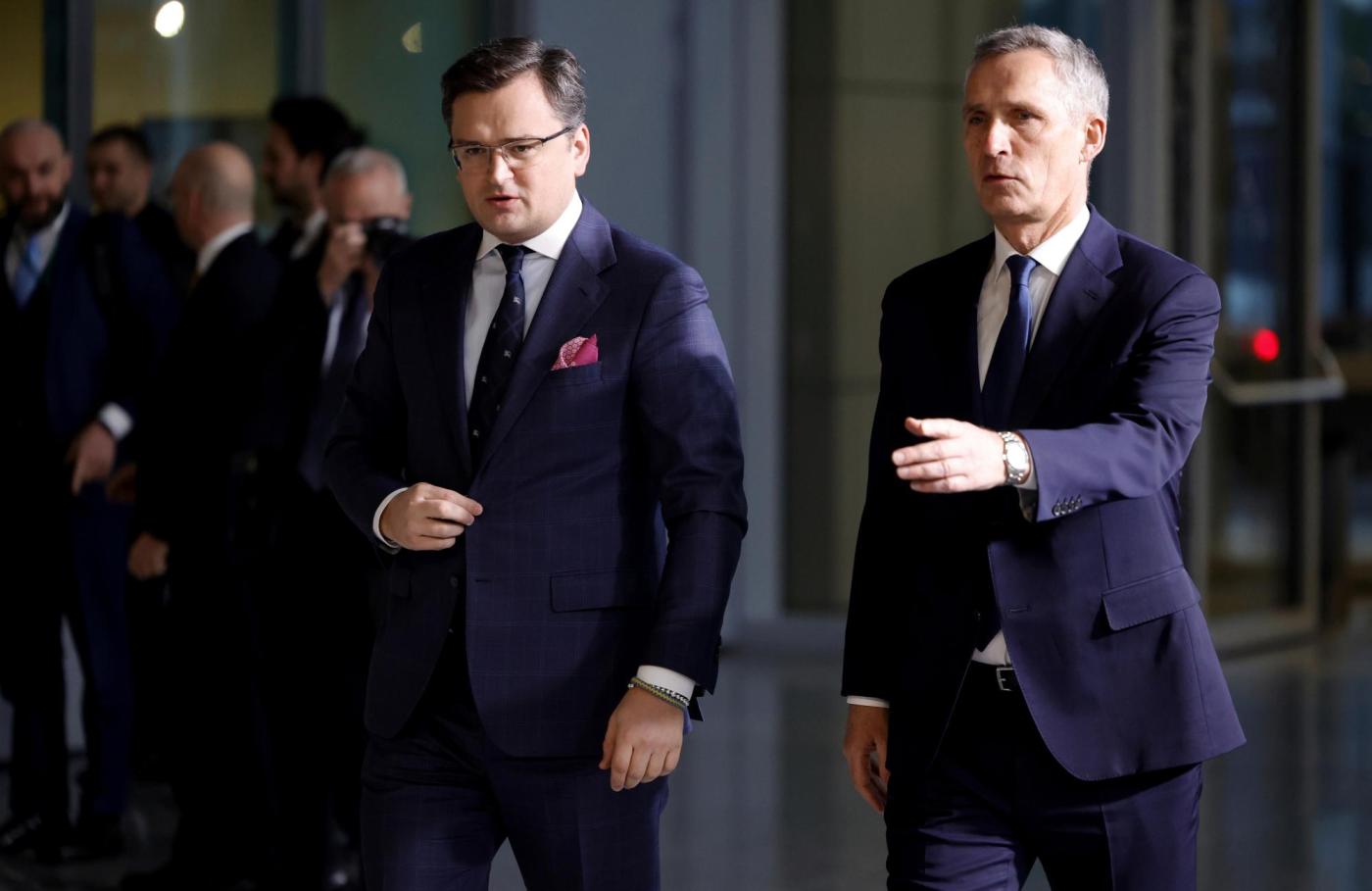 By The Associated Press

Foreign Minister Sergey Lavrov said Thursday that Ukraine had walked back its proposal that international guarantees of its security don’t apply to Crimea.

Russian annexed the Black Sea peninsula in 2014 and wants Ukraine to acknowledge Moscow’s sovereignty over it.

Lavrov also accused Ukraine of modifying a provision in a draft deal it had submitted earlier that said that military drills on Ukrainian territory could be organized with the consent of all guarantor countries, including Russia.

Lavrov added that Russia intends to continue the talks despite the Ukrainian “provocations.”

There was no immediate response to his claims from the Ukrainian government.

KEY DEVELOPMENTS IN THE RUSSIA-UKRAINE WAR:

— Russia is moving troops and focus toward the east, but that strategy carries risks as well

— Ukrainian refugees find quickest route into US goes through Mexico

— Russia makes debt payment in rubles, a move that could result in historic default

— Go to https://apnews.com/hub/russia-ukraine for more coverage

GENEVA — The World Health Organization says 73 people have died in 91 attacks on public health care in Ukraine during the war with Russia.

The targets have included ambulances, hospitals and clinics, and medical workers.

About half of Ukraine’s pharmacies are believed to be closed and 1,000 health facilities are near conflict areas, endangering the provision of care to those who need it, WHO said.

More than 250,000 people in Ukraine are living with HIV, routine immunizations for polio and measles are below sufficient levels, and “roughly 80,000 babies will be born over the next three months with insufficient pre- and post-natal care available due to the war in these dark days,” Kluge said.

“WHO is considering all scenarios and making contingencies for different situations that could afflict the people of Ukraine — from the continued treatment of mass casualties to chemical assaults,” Kluge said.

ROME — Ukraine’s new ambassador to the Vatican says he is convinced the Holy See is a “sincere partner” of Ukraine and is doing “everything possible to stop the war.”

The audiences came a day after Francis kissed a battered Ukrainan flag from Bucha and condemned the “massacre” in the city where evidence has emerged of what appears to be intentional killing of civilians since the Russians pulled out.

Francis has said the Vatican’s diplomats are working tirelessly to try to end the war. He himself went to the Russian embassy in the early days of the invasion to speak to the ambassador. He told reporters his aim with the unprecedented visit was to “ask him questions and convey my impressions.”

“Russia will definitely respond, and will do it as it sees fit,” Peskov said Thursday.

The U.S. on Wednesday announced that it is sanctioning Putin’s two adult daughters as part of a new batch of penalties on the country’s political and economic systems in retaliation for its alleged war crimes in Ukraine.

Peskov told a conference call with reporters that the sanctions “add to a completely frantic line of various restrictions” and the fact that the restrictions target family members “speaks for itself.”

“This is something that is difficult to understand and explain. But, unfortunately, we have to deal with such opponents,” Peskov said.

EU commission chief spokesman Eric Mamer said that von der Leyen will convey a message of “complete solidarity” and will reiterate the support provided by the 27-nation bloc to Ukraine.

EU foreign affairs chief Josep Borrell will also be on the trip.

Von der Leyen is the second president of an EU institution to travel to Ukraine following the trip by EU Parliament president Roberta Metsola last week.

Von der Leyen’s visit will come a day before she attends a pledging event in favor of Ukraine in Warsaw.

Speaking outside the Hinkley Point C nuclear power plant, Johnson said Thursday that the U.K. will take a “sensible and pragmatic view” on domestic hydrocarbons. He says that the country will “license stuff in the North Sea, rather than importing higher carbon fossil fuels from Russia.’

Johnson says the strategy is meant to make certain the country is “never again subject to the vagaries of the global oil and gas prices and … subject to blackmail, as it were, from people such as Vladimir Putin.’

The strategy comes after oil and natural gas prices soared following Russia’s invasion of Ukraine amid concerns that energy supplies could be curtailed.

High energy prices are fueling a cost-of-living crisis in Britain, where household gas and electricity prices jumped 54% this month.

“The sooner Ukraine receives this help, the more lives we can save in Ukraine,” Zelenskyy said in an address to Greek parliament Thursday.

Zelenskyy emphasized the destruction wrought on the southern port city of Mariupol, home to a sizeable Greek-Ukrainian community, and urged Greece to help prevent the same fate befalling Odesa, another Ukrainian port city with deep ties to Greece.

The Ukrainian president called for sanctions on all Russian banks and a ban on Russian ships from entering ports as a way of hindering Russia’s ability to finance the war.

“Russia is absolutely confident in its invincibility and that they could do whatever they want without going unpunished. We have to stop it. We must bring Russia to justice,” Zelenskyy said.

The images from Planet Labs PBC, analyzed Thursday by The Associated Press, appear to show the Ukrainian command ship Donbas ablaze at the port, as a nearby building also burned around 2:30 p.m. local time Wednesday.

The cause of the fire remained unclear.

Russian forces are strangling the city on the Sea of Azov as they press forward in their war that began Feb. 24. Russian-backed separatists in eastern Ukraine had accused Ukrainian forces of setting fire to the vessel as a “provocation” to “discredit the Russian military.”

There was no immediate comment from Ukrainian authorities on the blaze.

LONDON — Britain’s defense ministry says Russia is bombarding infrastructure targets to wear down Ukraine’s government and military as it prepares for a renewed assault on the country’s east.

The ministry said in an intelligence update Thursday that “progressing offensive operations in eastern Ukraine is the main focus of Russian military forces.”

It says Russia is targeting the “line of control” between Ukrainian-held areas in the Donbas and those held by Russia-supporting separatists with artillery and airstrikes.

Even so, the U.K. says that “Russian forces are likely to continue facing morale issues and shortages of supplies and personnel.”

KYIV, Ukraine — Ukraine is accusing Hungary of undermining the unity of the European Union by supporting Moscow as Russia presses its invasion.

Hungary is an EU member, and Ukraine wants to join the 27-nation bloc. Ukrainian officials are angry about Hungary’s response to evidence that Russian troops killed people indiscriminately before recently retreating from in Bucha, northwest of Kyiv, which the EU has condemned.

Nikolenko also blasted Hungarian Prime Minister Viktor Orban’s statement about Hungary’s readiness to pay for the Russian gas in rubles, describing it as unfriendly and flying in the face of the EU’s rejection of Moscow’s currency demand.

In a statement, Nikolenko dismissed Orban’s offer to host talks between Russia and Ukraine as cynical, saying that “if Hungary wants to help end the war, it must stop damaging EU unity, support new sanctions, offer military assistance to Ukraine and stop creating additional resources to finance the Russian war machine.”

Russia is expected to intensify its military campaign for control of Ukraine’s industrial east in coming days and weeks, and Ukraine has appealed to NATO for more weapons to help stop it.

Deputy Prime Minister Iryna Vereshchuk said civilians from the Donetsk, Luhansk and Zaporizhzhia regions will be able to evacuate to the cities of Zaporizhzhia and Bakhmut.

Vereshchuk said on the messaging app Telegram that it would be possible to travel from Mariupol and Enerhodar to Zaporizhzhia by car and from Berdyansk, Tokmak and Melitopol by car and on buses.

Evacuations to Bakhmut, a city in the Donetsk region, will take place in Severodonetsk, Lysychansk, Popasna, Girske and Rubizhne of the Luhansk region.

BRUSSELS — NATO Secretary-General Jens Stoltenberg is calling on members of the organization to provide more weapons for Ukraine and not just defensive anti-tank and anti-craft arms.

As NATO defense ministers gathered in Brussels on Thursday, Stoltenberg said “I have urged allies to provide further support of many different types of systems, both light weapons but also heavier weapons.”

Stoltenberg says that NATO countries, but not NATO as an organization, are supplying many kinds of arms and other support to Ukraine but that the 30 allies can do more.

He says that “Ukraine is fighting a defensive war, so this distinction between offensive and defensive weapons doesn’t actually have any real meaning.”

Stoltenberg is insisting that it is also important for NATO not to be dragged into a wider war with Russia.

“NATO is not sending troops to be on the ground. We also have a responsibility to prevent this conflict from escalating beyond Ukraine, and become even more deadly, even more dangerous and destructive,” he said.

BRUSSELS — Ukrainian Foreign Minister Dmytro Kuleba is appealing to NATO to provide his war-torn country with weapons to help avoid further atrocities like those reported in the town of Bucha this week.

Kuleba says that “we know how to fight. We know how to win. But without sustainable and sufficient supplies requested by Ukraine, these wins will be accompanied by enormous sacrifices.”

“The more weapons we get and the sooner they arrive in Ukraine, the more human lives will be saved.”

He urged Germany in particular to go further, and speed the dispatch of sorely needed equipment and arms, saying that “while Berlin has time, Kyiv doesn’t.”

WASHINGTON — The U.S. Senate will take up legislation Thursday to end normal trade relations with Russia and to ban the importation of its oil.

Both bills have been bogged down in the Senate, frustrating lawmakers who want to ratchet up the U.S. response to Russia’s war against Ukraine.