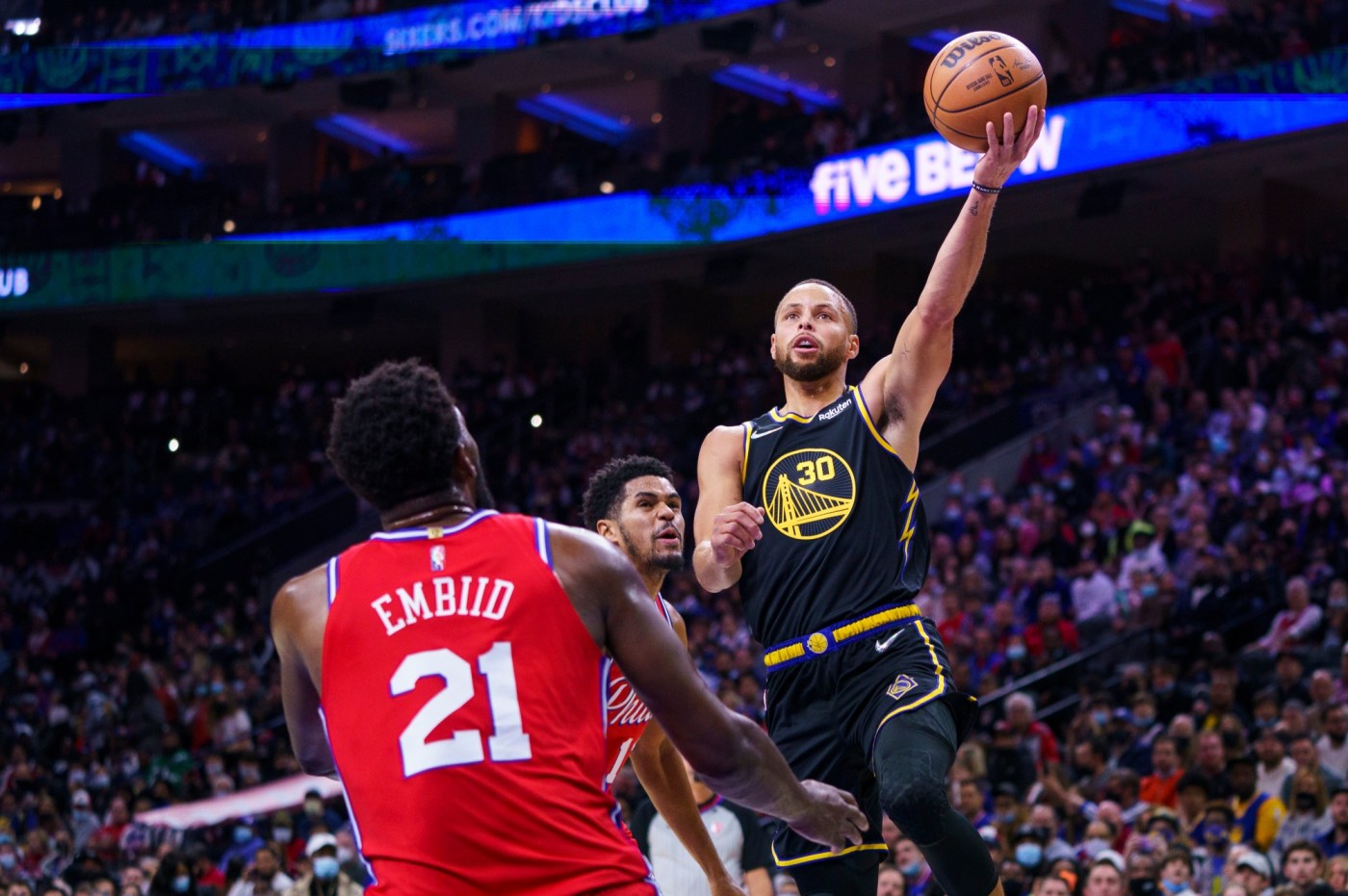 PHILADELPHIA — It won’t happen at home — coach Steve Kerr and most the rest of the known universe agree — but Steph Curry was in no hurry to make history Saturday night in Philadelphia. That leaves four more potential sites for the inevitable record-breaking shot, and Curry can find a special meaning in them all.

It took 22 minutes and 15 seconds of game time for Curry to start the countdown, the second straight game within range of the all-time 3-point record that he has started by missing at least his first four shots. With 18 points and nine rebounds, Curry came close to a double-double, but the magic number only decreased by three in the face of stiff defense from Matisse Thybulle. As he takes his pursuit to Indianapolis, it stands at seven, a mark he has reached in 101 previous games.

The Warriors needed more to pull out a win in the first of five straight games away from home. Golden State built a lead as large as 13 points midway through the third quarter but only managed 20 fourth-quarter points in an eventual 102-93 loss to the 76ers, its lowest scoring total of the season. Curry’s 18, on 6-of-20 shooting (3-of-14 from 3), was only good for third on the team, behind 23 from Jordan Poole and 20 from Andrew Wiggins.

Curry shrugged off the pressure of the pursuit. However, it was clear he was cognizant of the stakes.

“You could create a narrative for any of these next four games coming up,” Curry said Friday evening outside the Temple University gym, where the Warriors hosted practice before kicking off a five-game road trip Saturday against the 76ers.

Then he listed the possibilities.

“Playing against Seth (Saturday); how much Reggie (Miller) meant to Indiana; obviously the Garden speaks for itself; Boston, where Ray passed Reggie on that floor,” Curry said. “We’ll find a special narrative for you whenever it happens.”

Taking into account Curry’s per-game average this season, Monday at Indiana has been the odds-on favorite. But NBA insider Marc Stein reported Friday that Golden State was considering resting Curry in Indiana, which could potentially set him up to break the record on basketball’s biggest stage, at Madison Square Garden, the following night.

Kerr said before tipoff Saturday that no decisions had been made.

The Indiana game is the first leg of two back-to-backs the Warriors face on this road trip.

“We’re going to see how each game goes and how each day goes and we’ll see how he’s doing,” Kerr said. “But it is a difficult trip — a couple back-to-backs and some tough travel circumstances. We’ll see how it goes.”

Despite a snap of cold shooting as he closes in on history, it is hard to imagine Curry returning home to the Bay Area still trailing Ray Allen on the all-time record list.

Curry has climbed 30 shots closer to the record over his past six games — a pace on par with his season average of about 5.5 per game — but they have come with an uncharacteristic inefficiency: 34.8% from distance, well below his career hit rate of 43.2%.

Still, Kerr said he wouldn’t have been shocked to see Curry break two records at once last week — the 16 required would have also topped Klay Thompson’s single-game mark — but admitted Saturday that the added pressure didn’t help Curry.

“I was saying, yeah, it wouldn’t shock me if he did make 16, and it wouldn’t have. But I shouldn’t have said that,” Kerr said. “Because I think it fed into the idea that Steph was going to come out and break the record. I mean, he was 16 3s away. … Just the mere fact that we were talking about it when he was 16 3s away and we were unironically speaking about it shows you the expectations that we all have for Steph, myself included”

Asked prior to tipoff if he thought it was probable that Curry would hit the 10 long balls required to break the record, Kerr paused and laughed. After all, he had just admonished himself for setting expectations too high when Curry was 16 away before the Warriors’ last home game.

“I’m confident that he’s going to break the record on this road trip,” Kerr said. “How’s that?”